Courtship, Proposals and the Phonograph 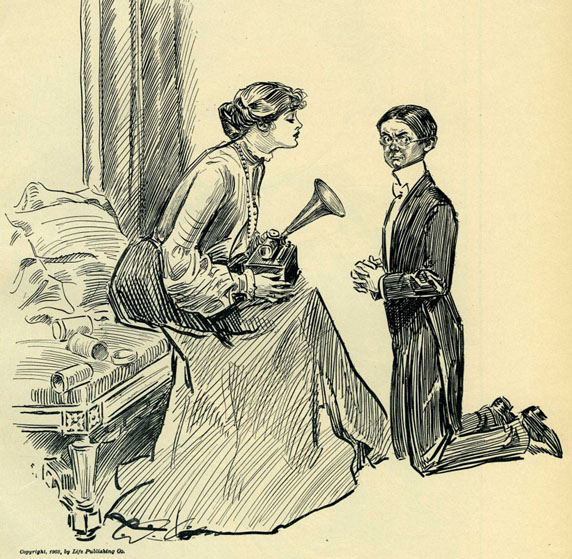 The Phonograph's Role in the Steps Towards Matrimony

The phonograph's revolution included its participation in sometimes unexpected aspects of daily life. One of these areas was its involvement with courtship all the way up to the day of the wedding.

A machine that could record spoken words with unimpeachable veracity would naturally become part of popular culture and the humor of its time. Examples of the words of a participant being unknowingly recorded and then later played back as evidence of what had been said are numerous.

An early illustration of this was in Judge magazine, January 28, 1888 titled "Courtship of To-Day." Pictured in Grant E. Hamilton's lithograph are several new sources from "Modern Science" capable of documenting words and actions in ways never before available. Two Edison tinfoil phonographs are shown ready to record whatever is said. Telephones, two cameras, a stenographer, an illustrator, and a typesetter also await the suitor's next step.

"Young men must be very careful how they trifle with the tender affections of the young maidens of today as Modern Science has come to their aid, and the way of the transgressor will be made hard for him!" 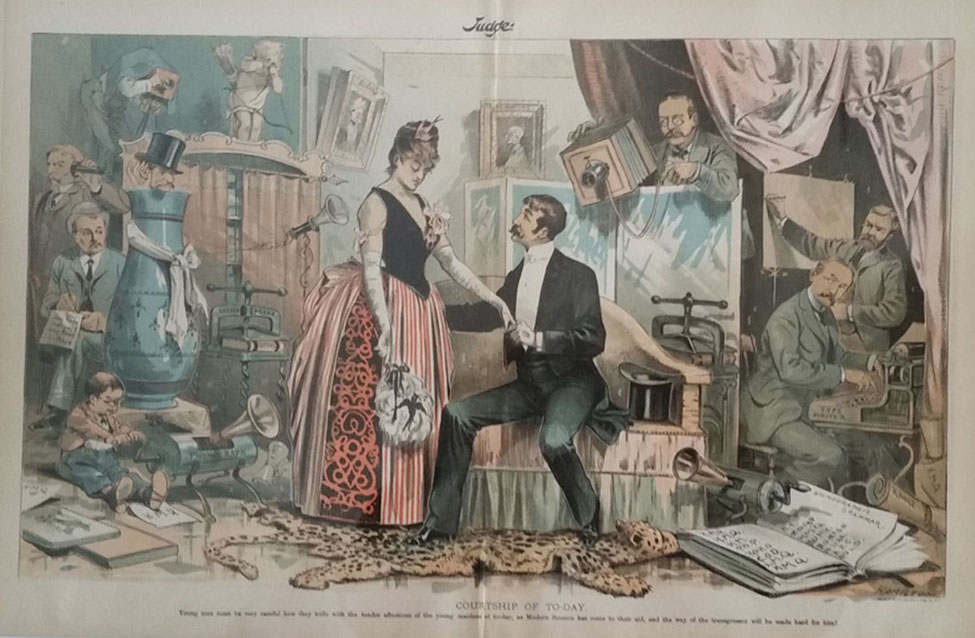 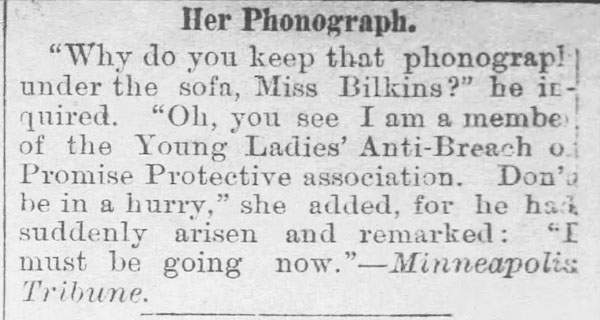 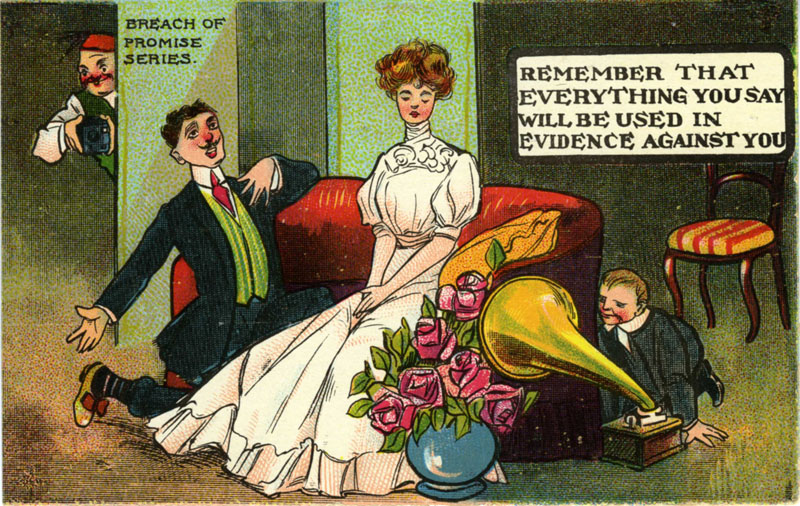 Like the father capturing the proposal with his camera, the Phonograph can captivate sounds, with or without the knowledge or consent of the source  Thomas Edison, The Phonograph and its Future, 1878 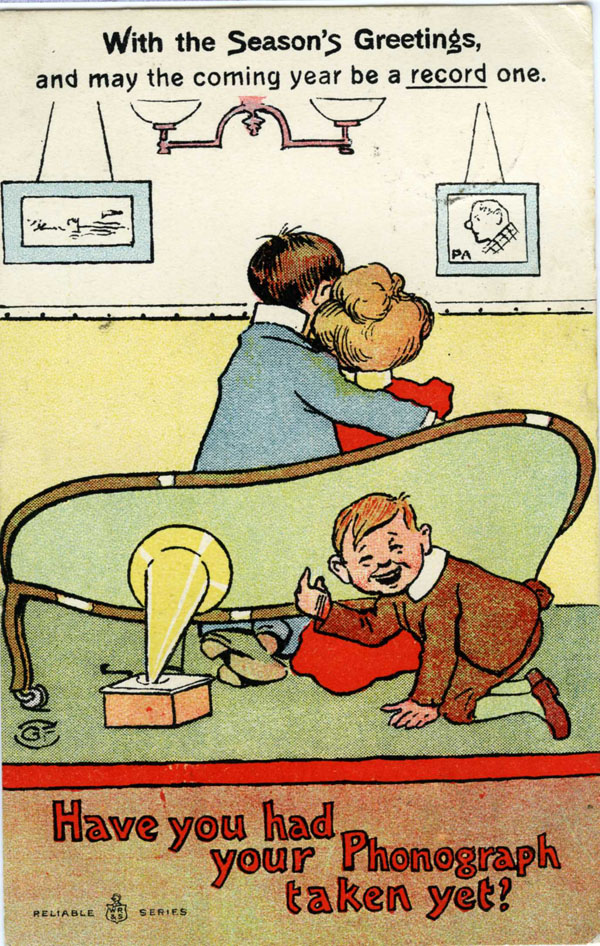 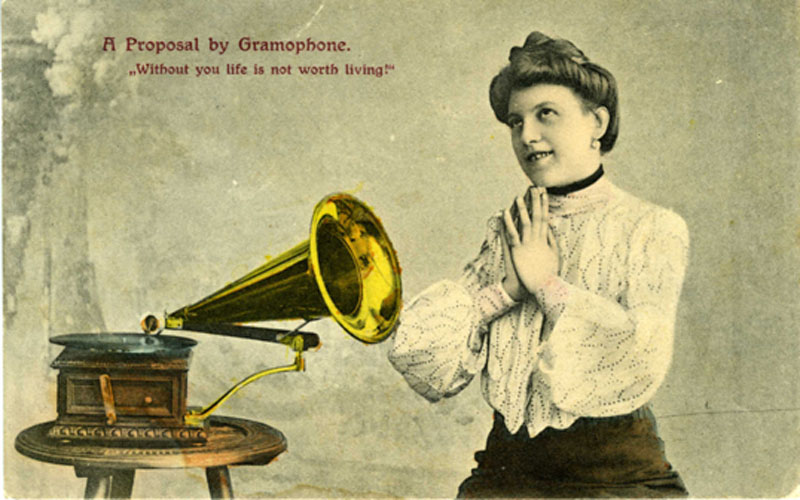 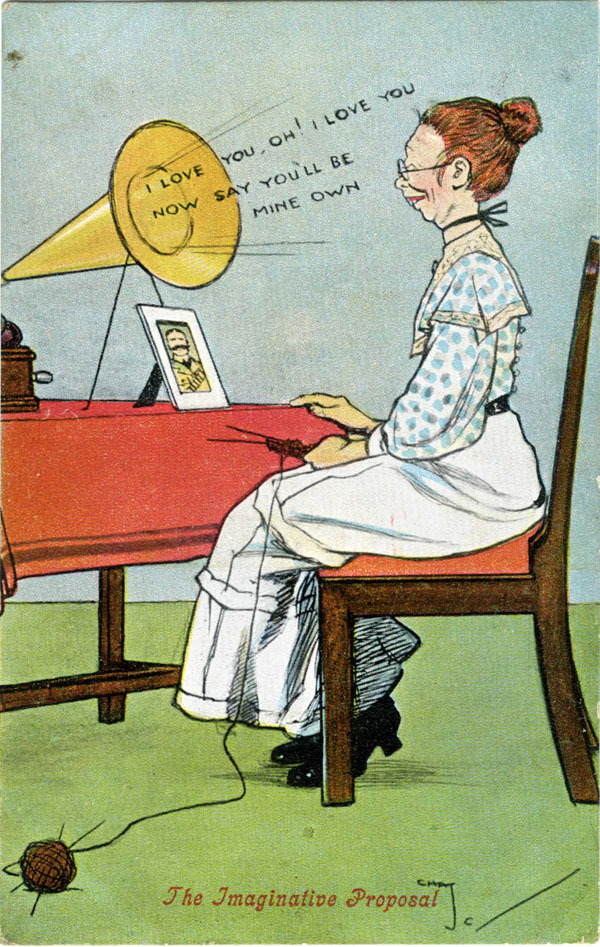 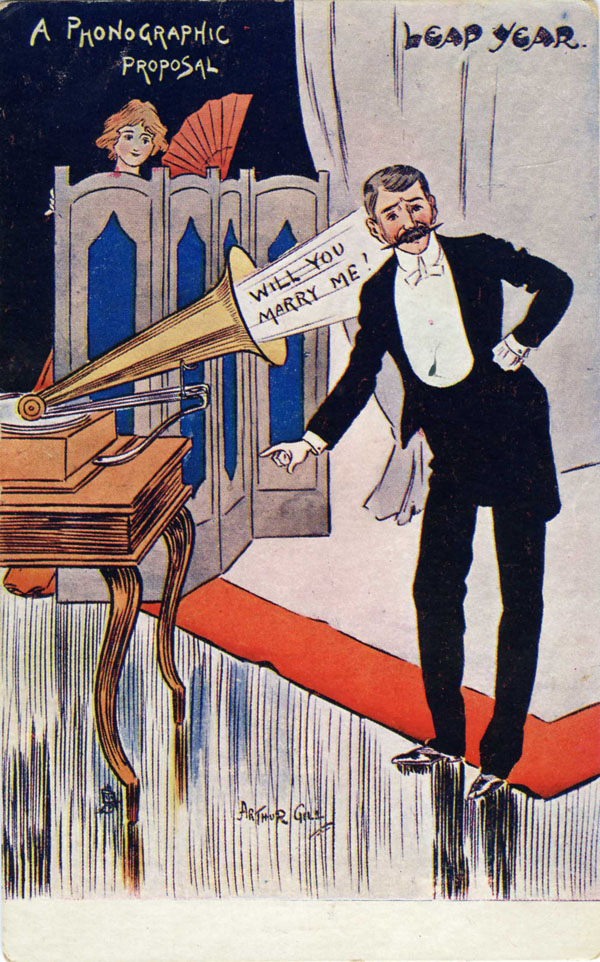 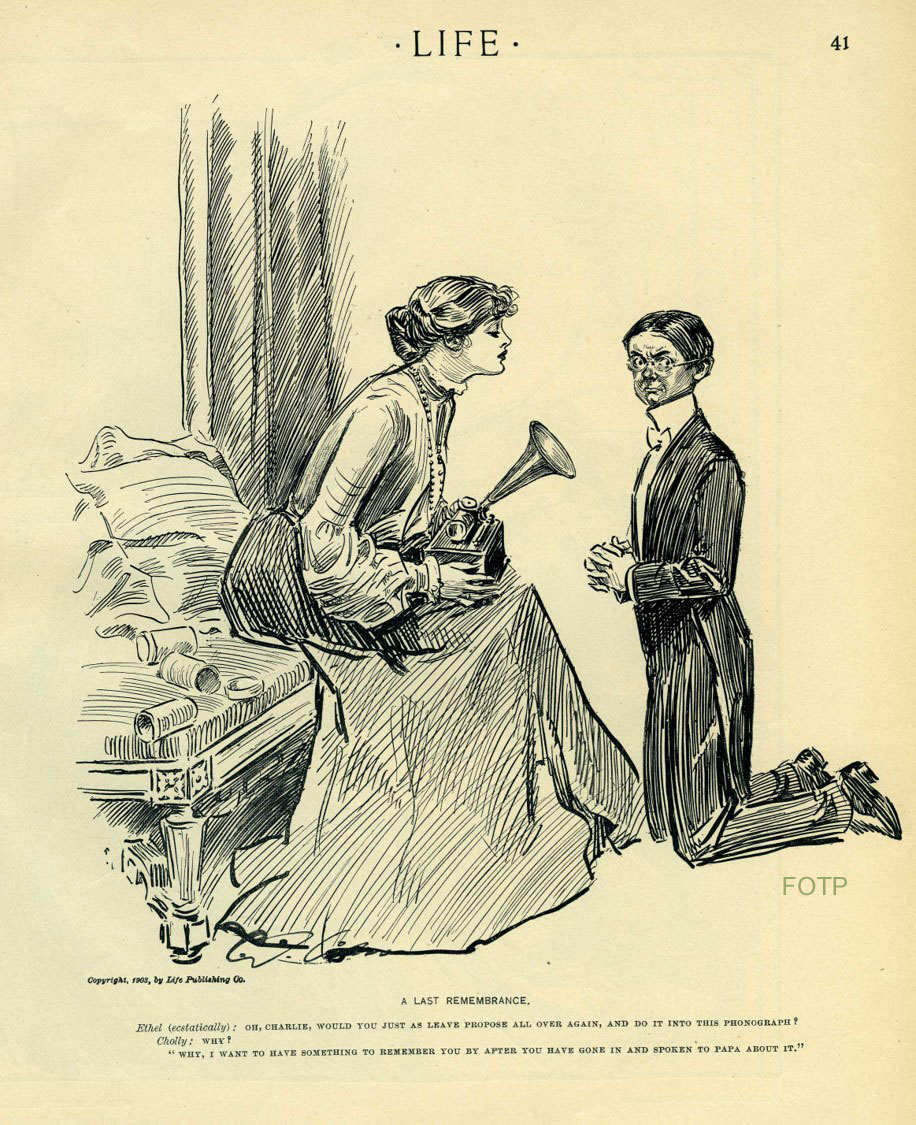 Even if the illustration wasn't included newspapers across the country repeated humor like the above for their local readers. The Gordon Journal in Gordon, Nebraska included "A Last Remembrance" in their September 11, 1903 newspaper (and credited Life).

The following newspaper story reports how one engagement announcement in Leominster, Massachusetts in 1912 was performed using the phonograph. 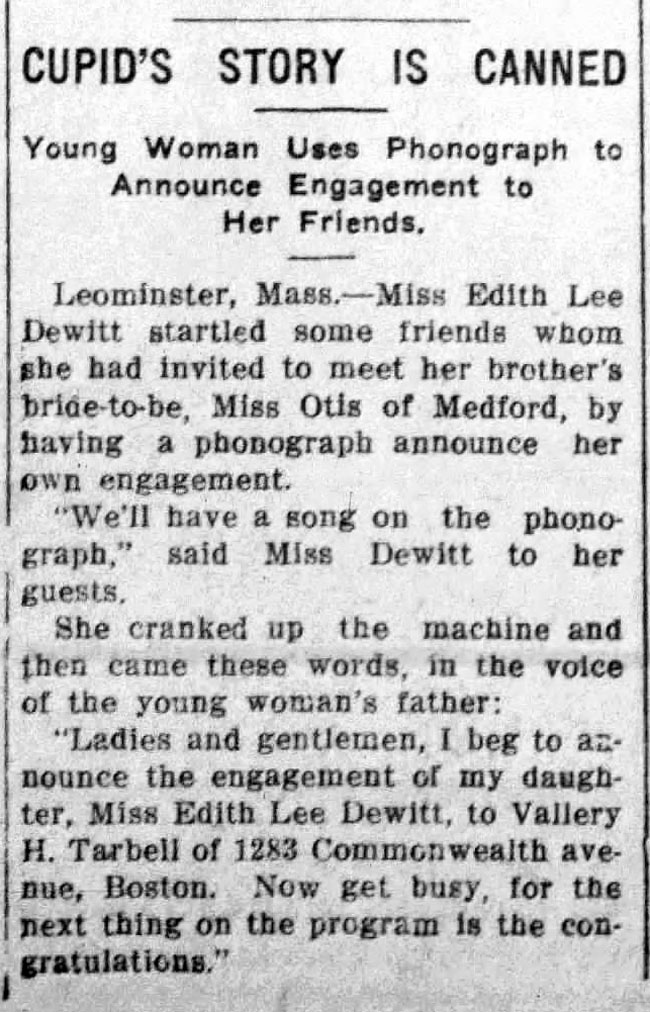 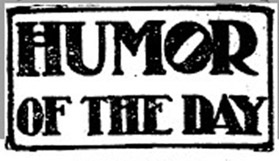 After marriage the phonograph would also be seen in popular culture as a potential participant (at least as a humourous subject). 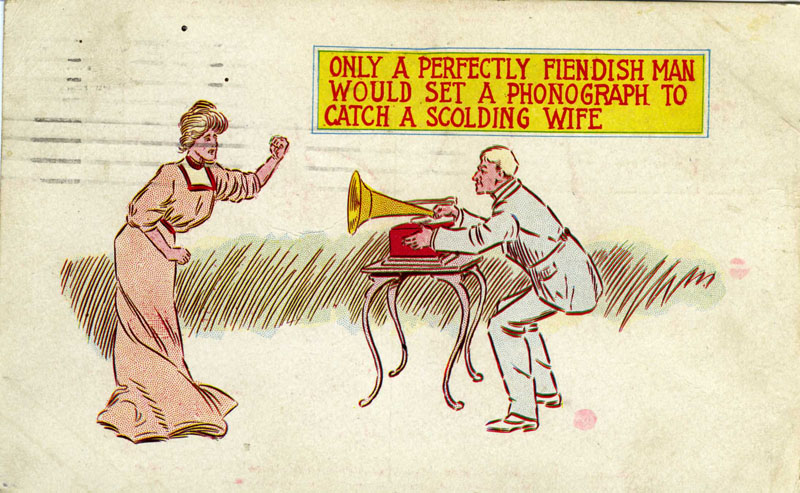 Recording the words of a scolding wife for future use, postmarked 1908 (PM-0265)

This following poem reveals the fate of man wooing another man's wife, both unaware that a phonograph had been hidden behind the door by the husband. 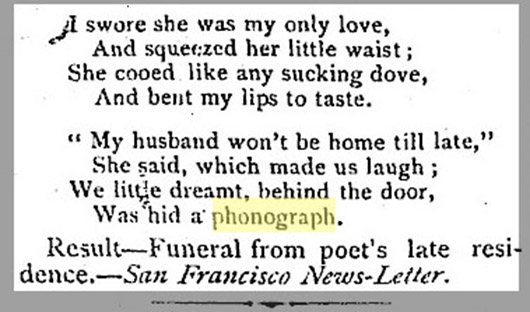 As reprinted by the Colorado Springs Gazette, September 21, 1878