Clear as a Bell - The Sonora Phonograph 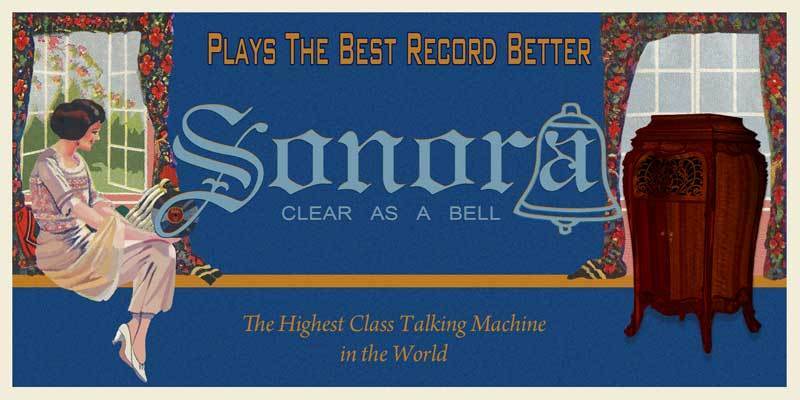 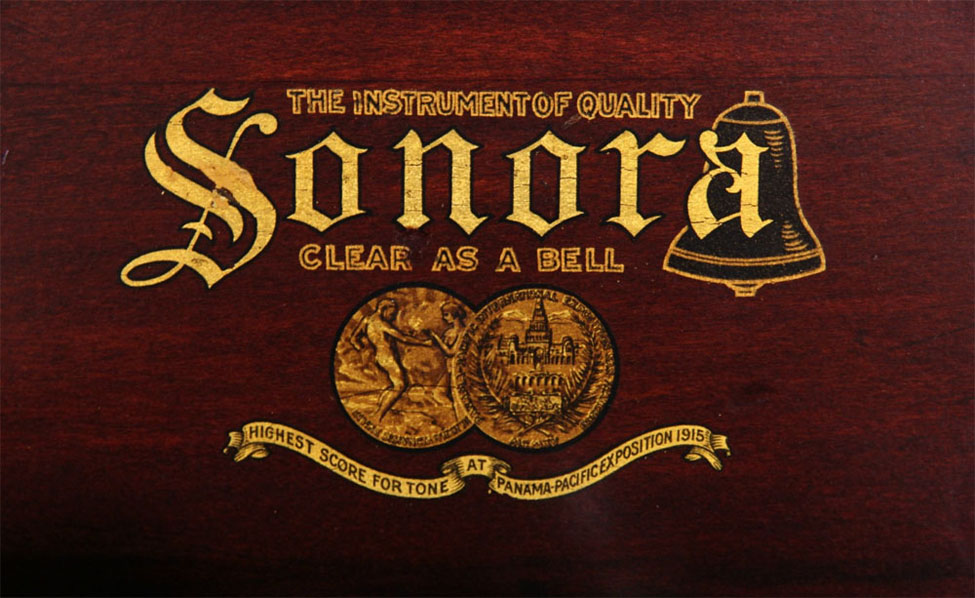 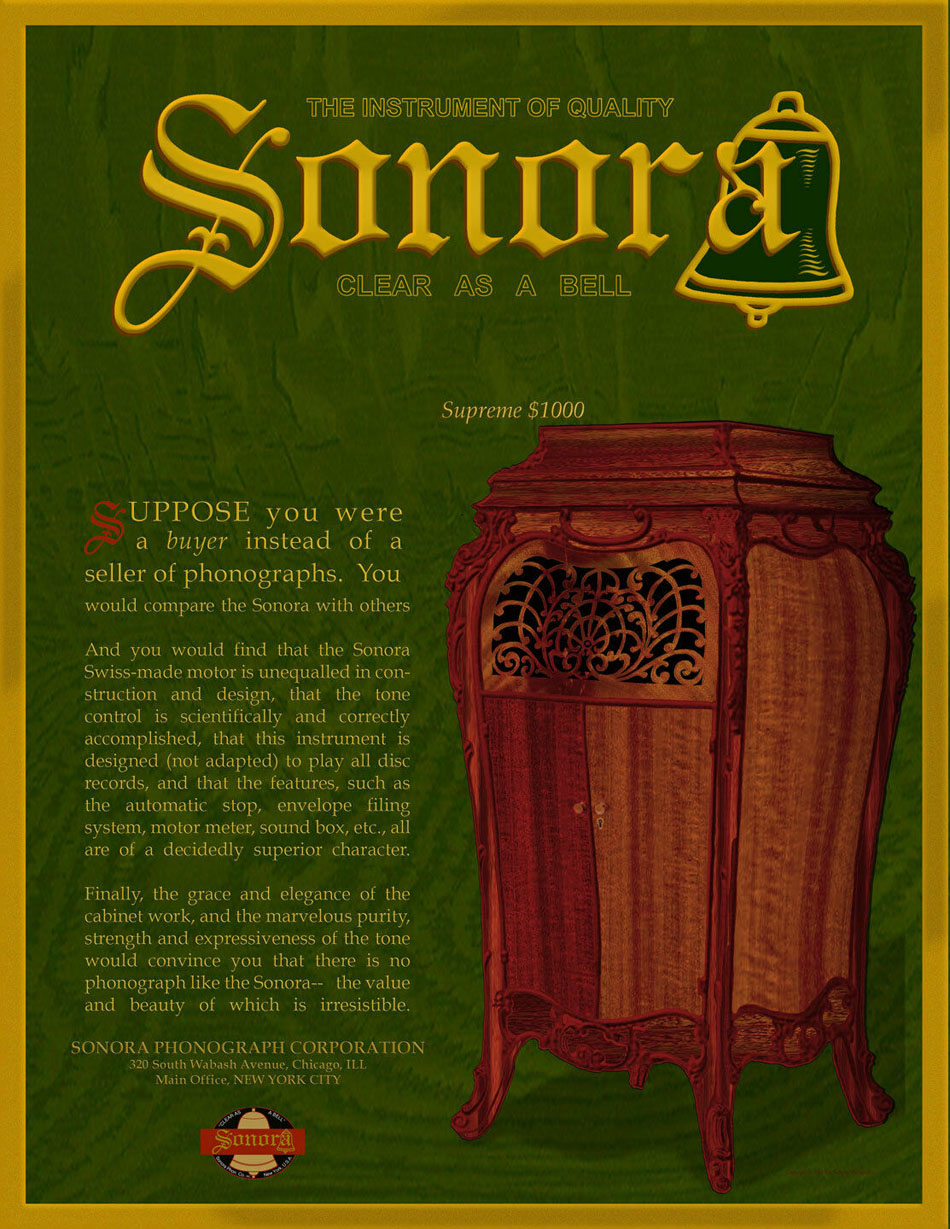 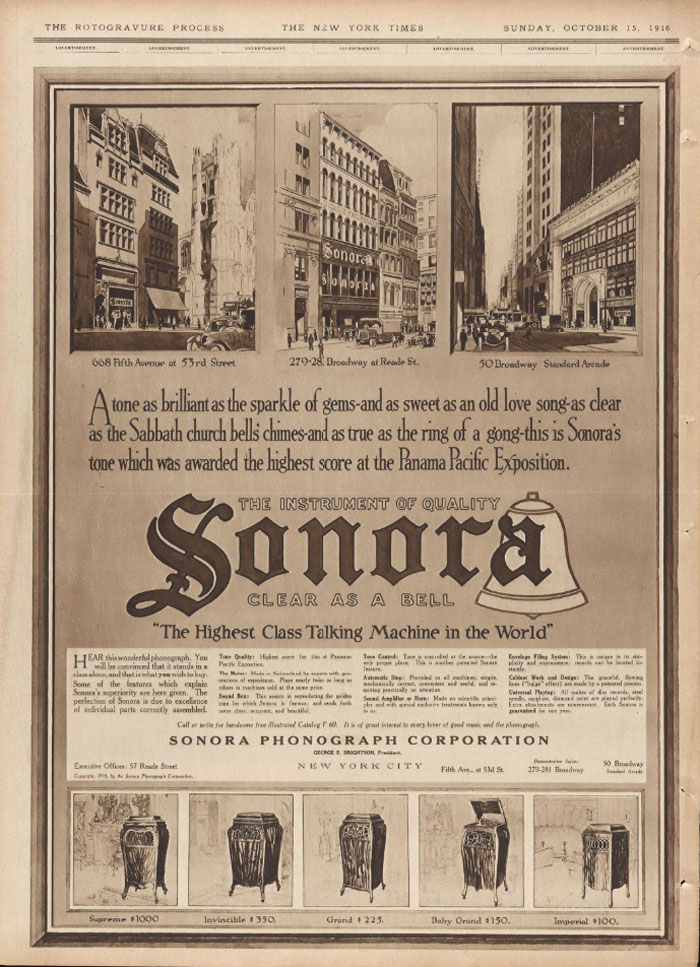 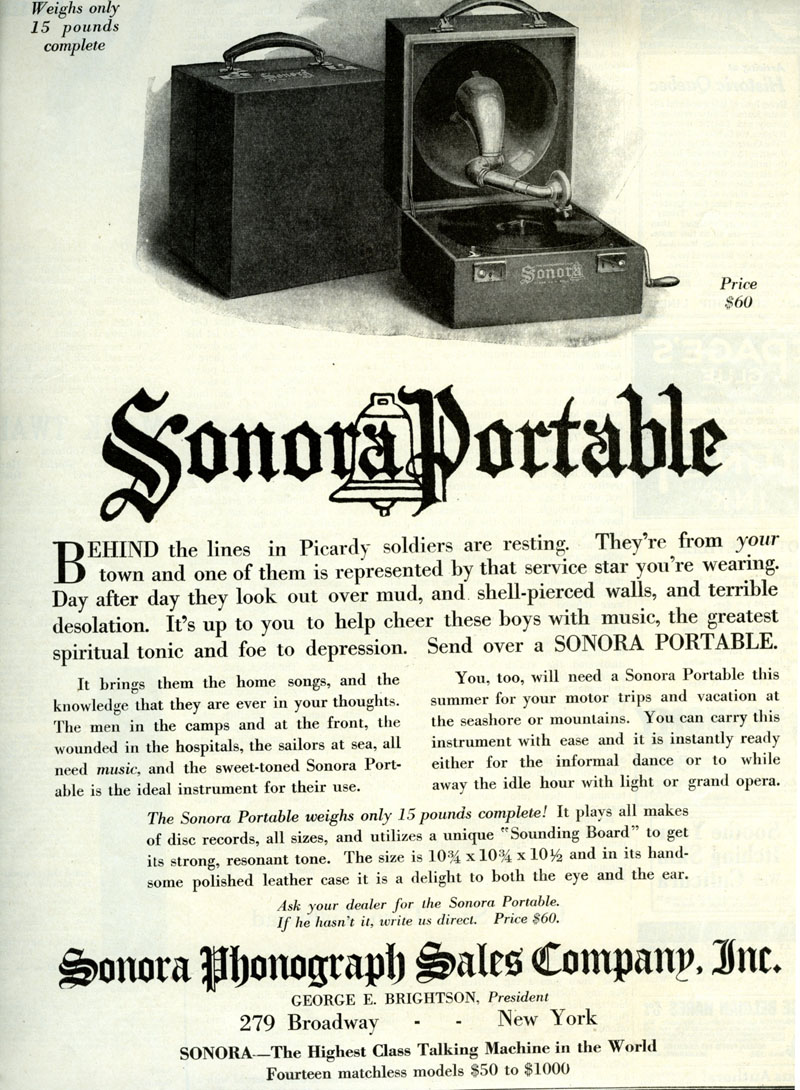 Send over a Sonora Portable to the cheer up those boys "behind the lines in Picardy." Leslie's Weekly, June 1918 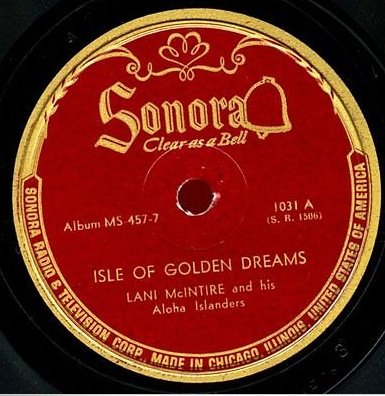 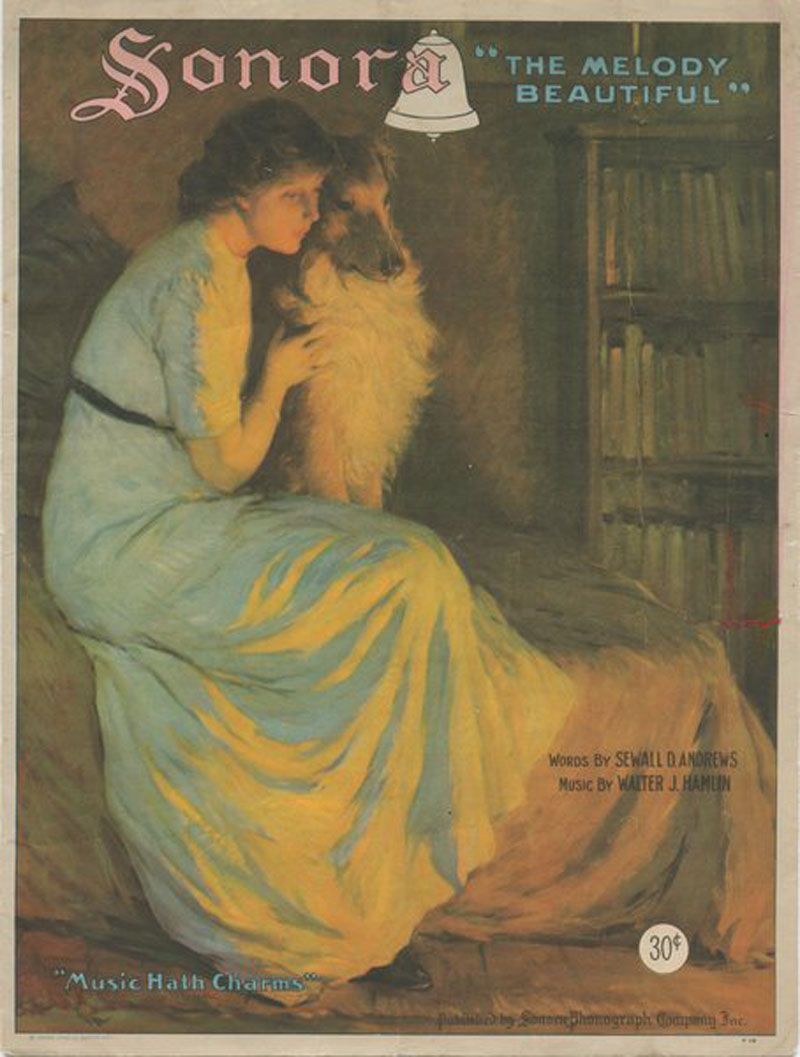 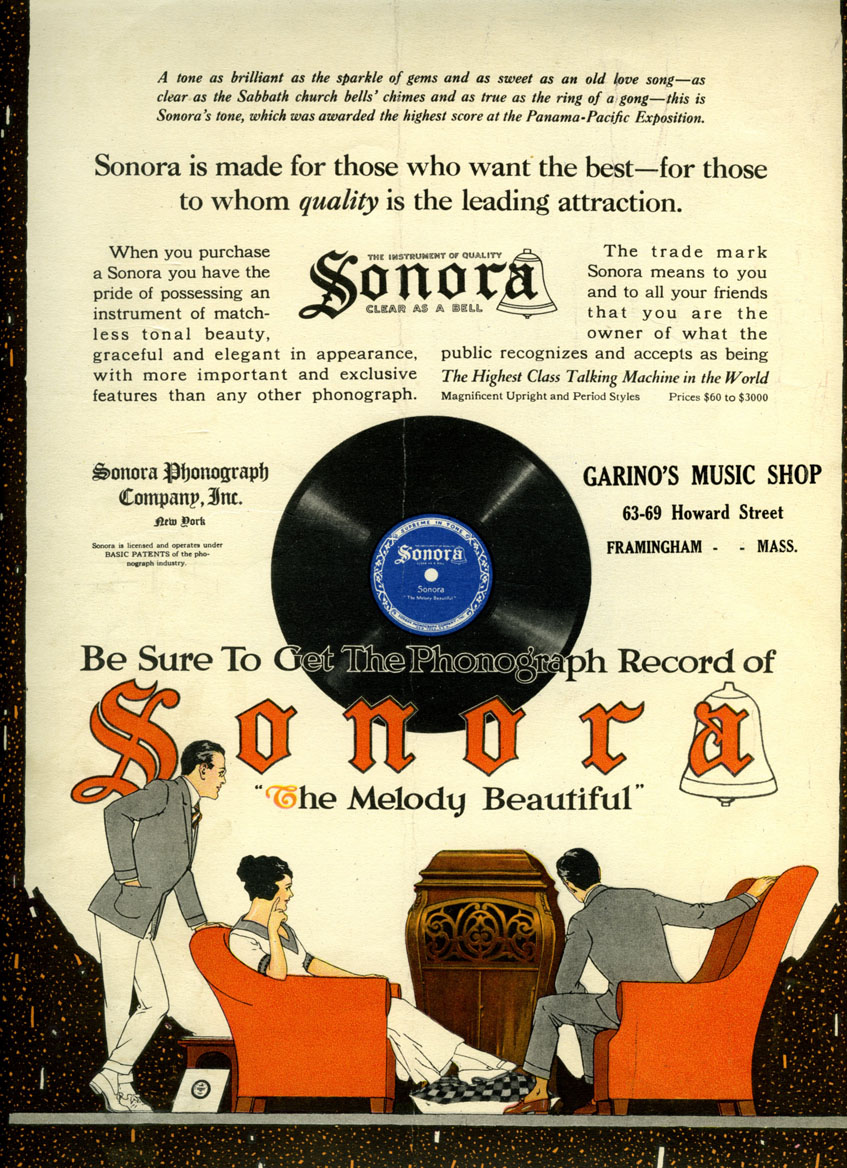 Ad on back of 1920 Sonora Sheet Music 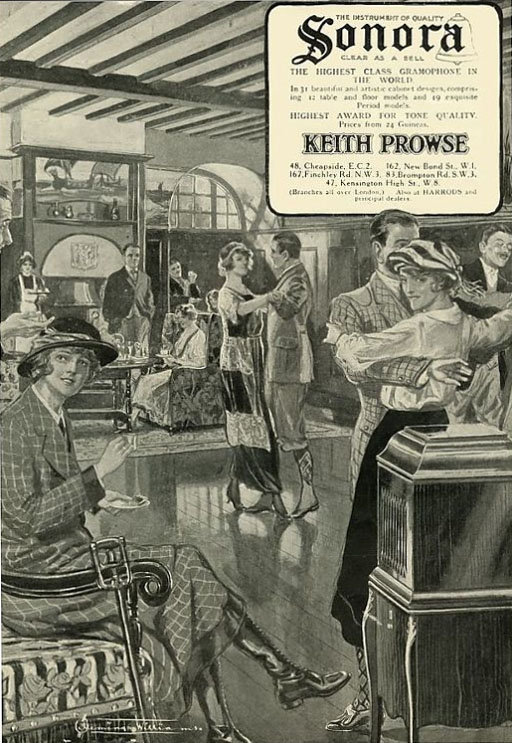 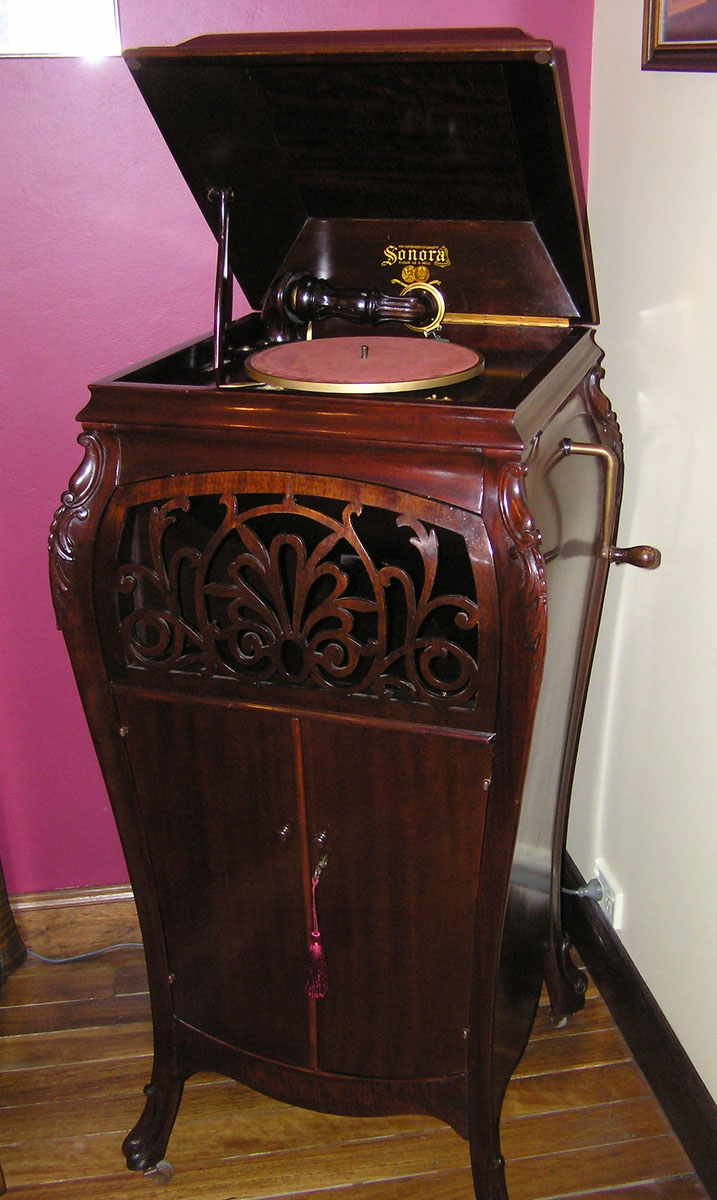 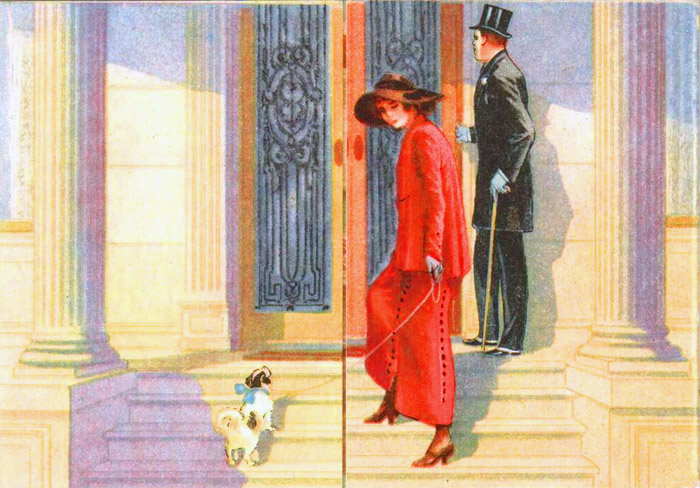 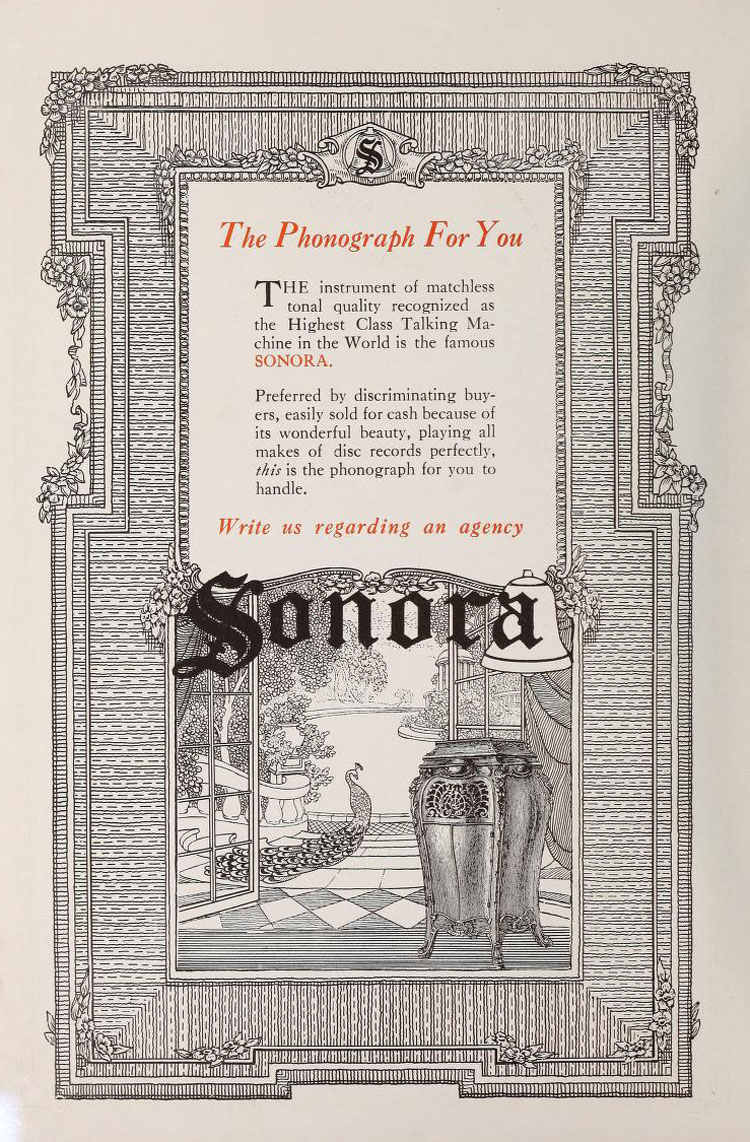 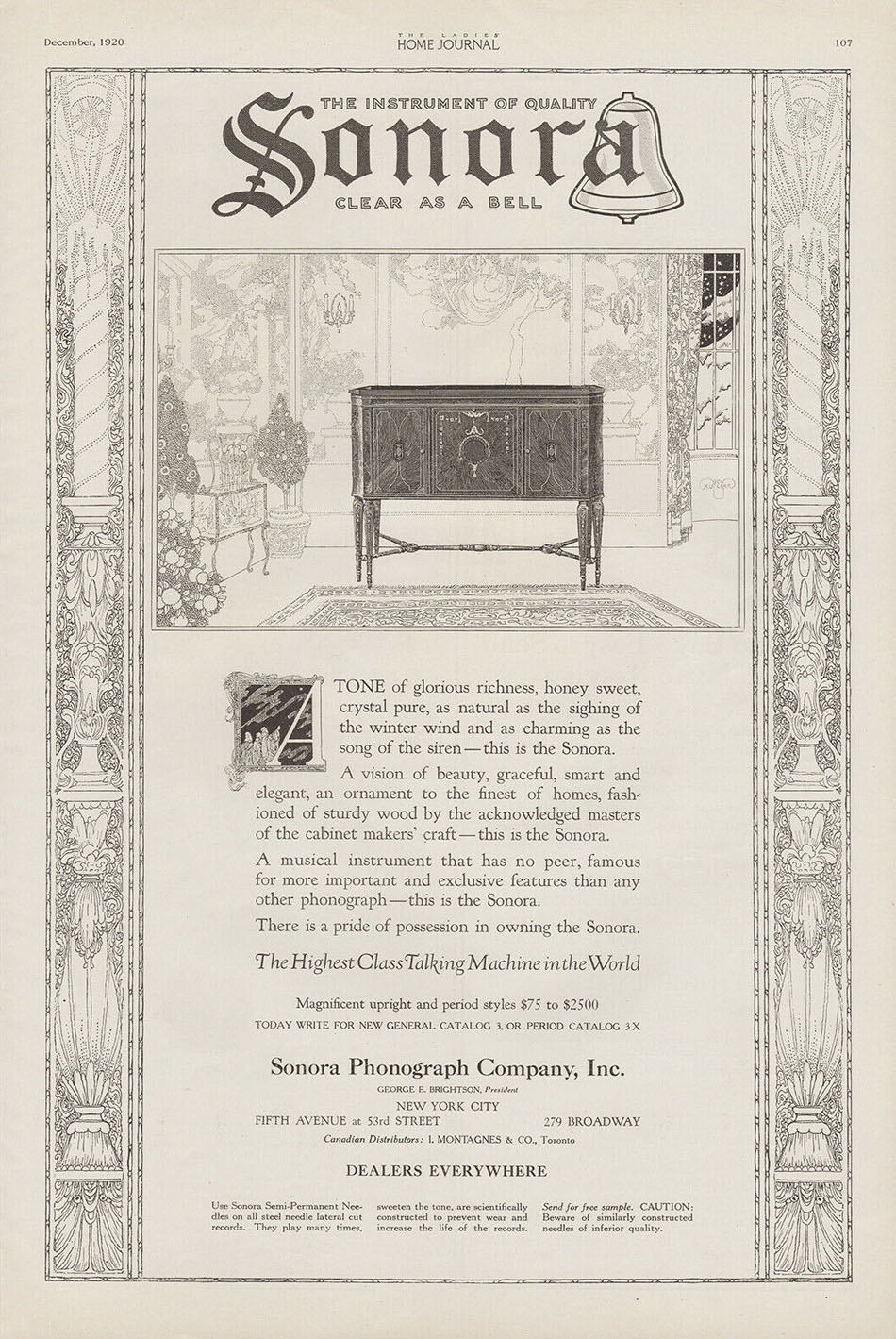 "Clear as a Bell" - "as natural as the sighing of the winter wind and as charming as the song of the Siren..." The Ladies' Home Journal, December 1920 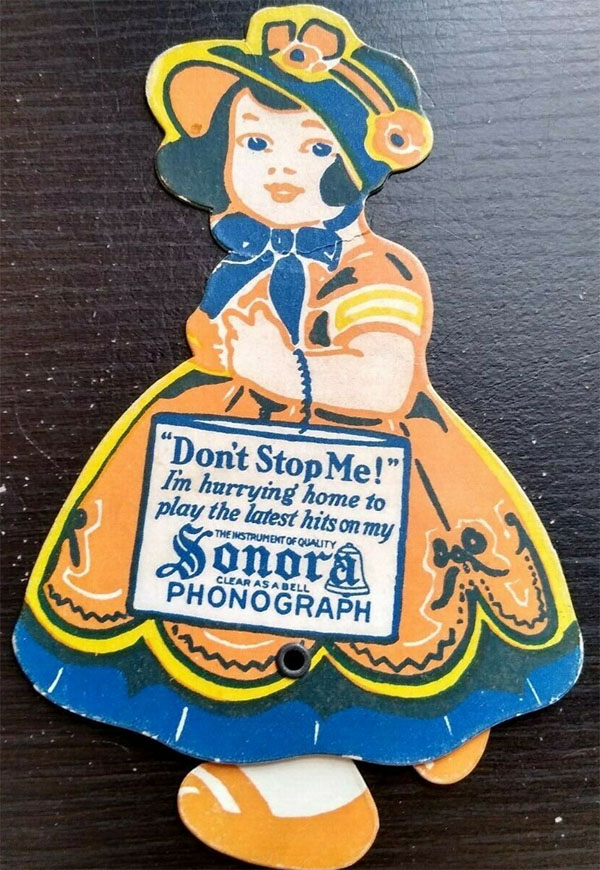 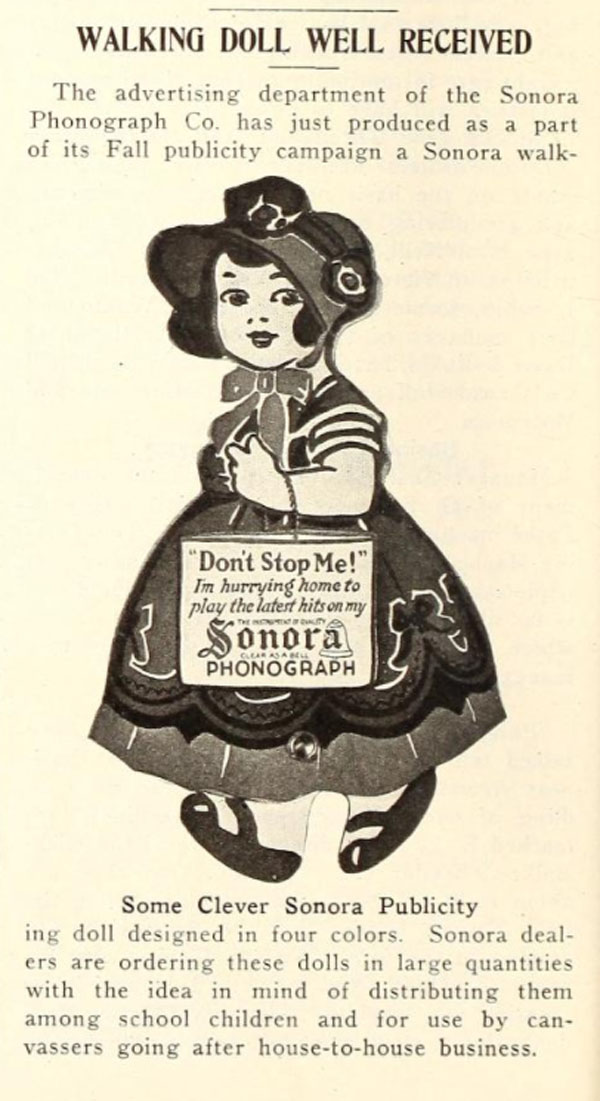 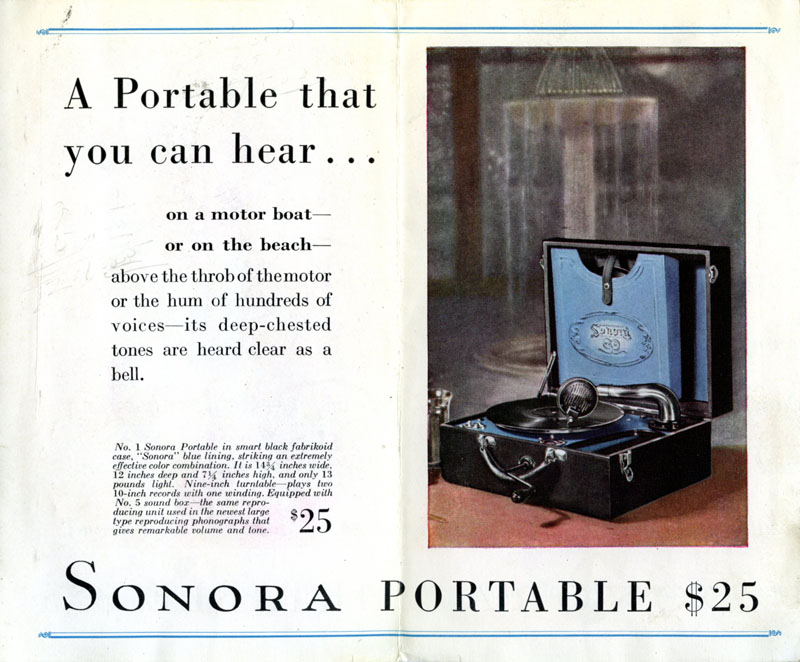 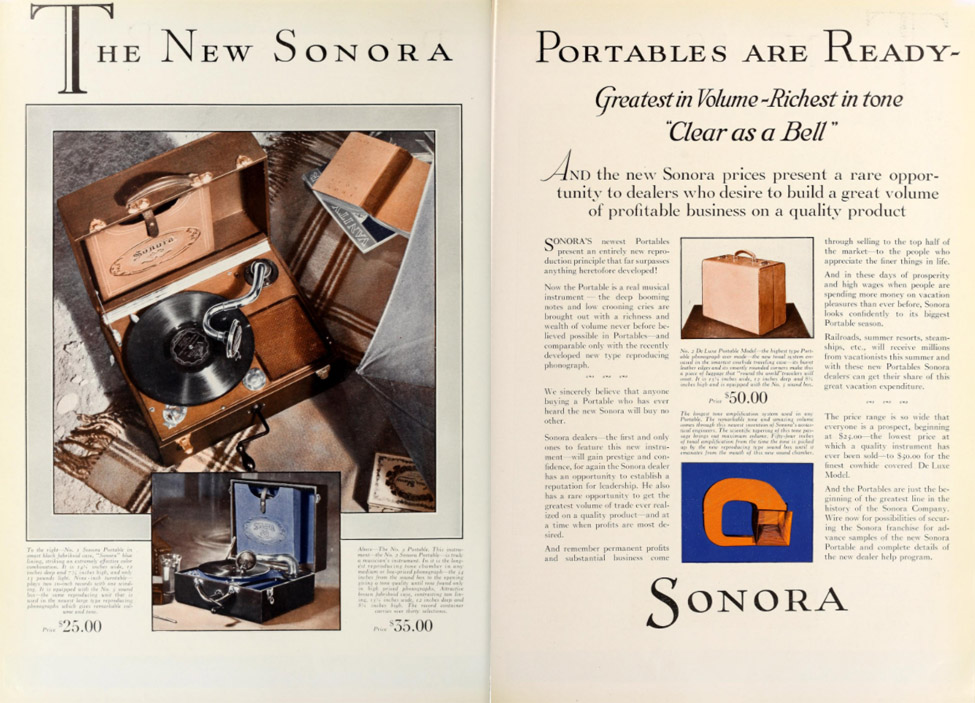 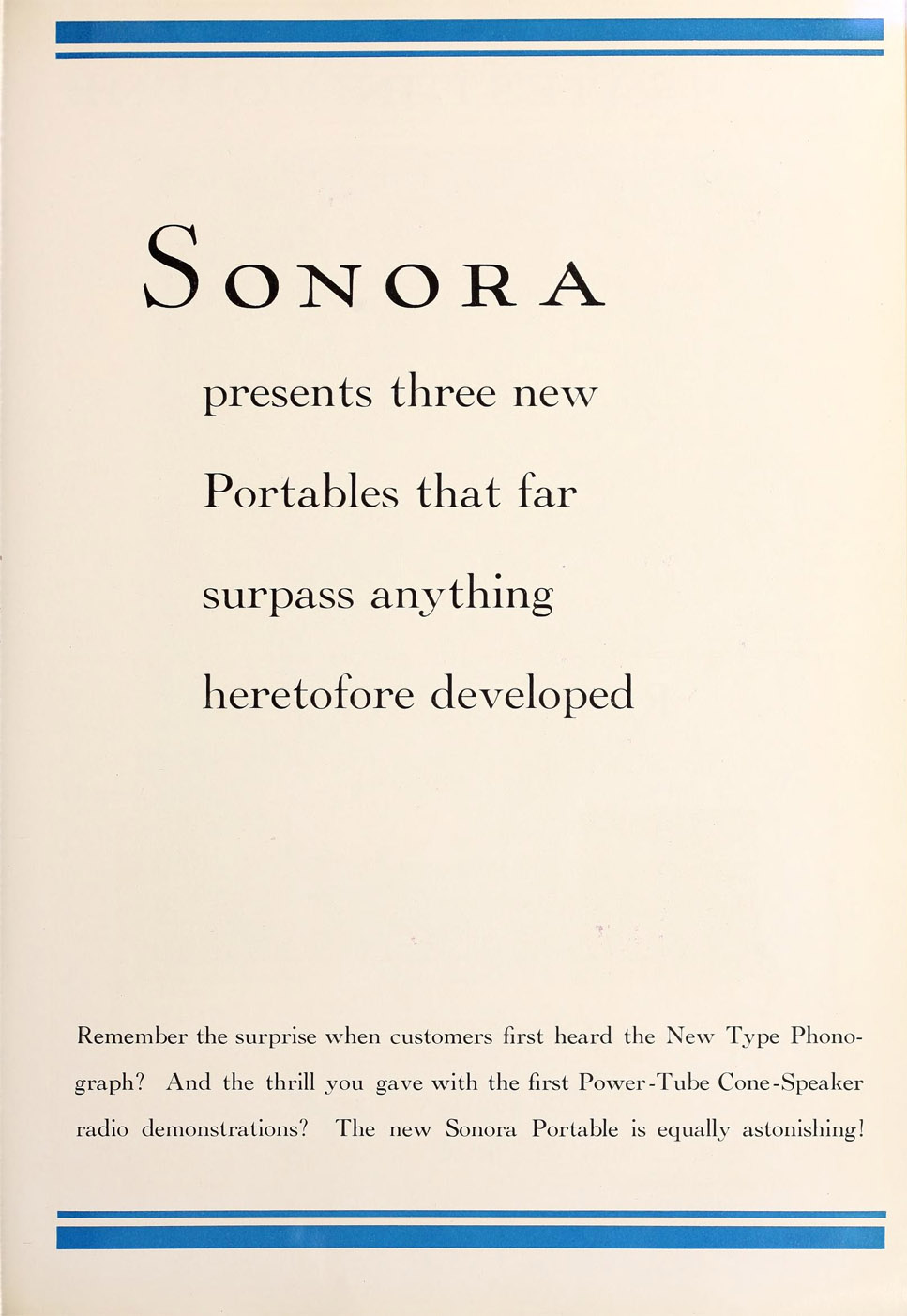 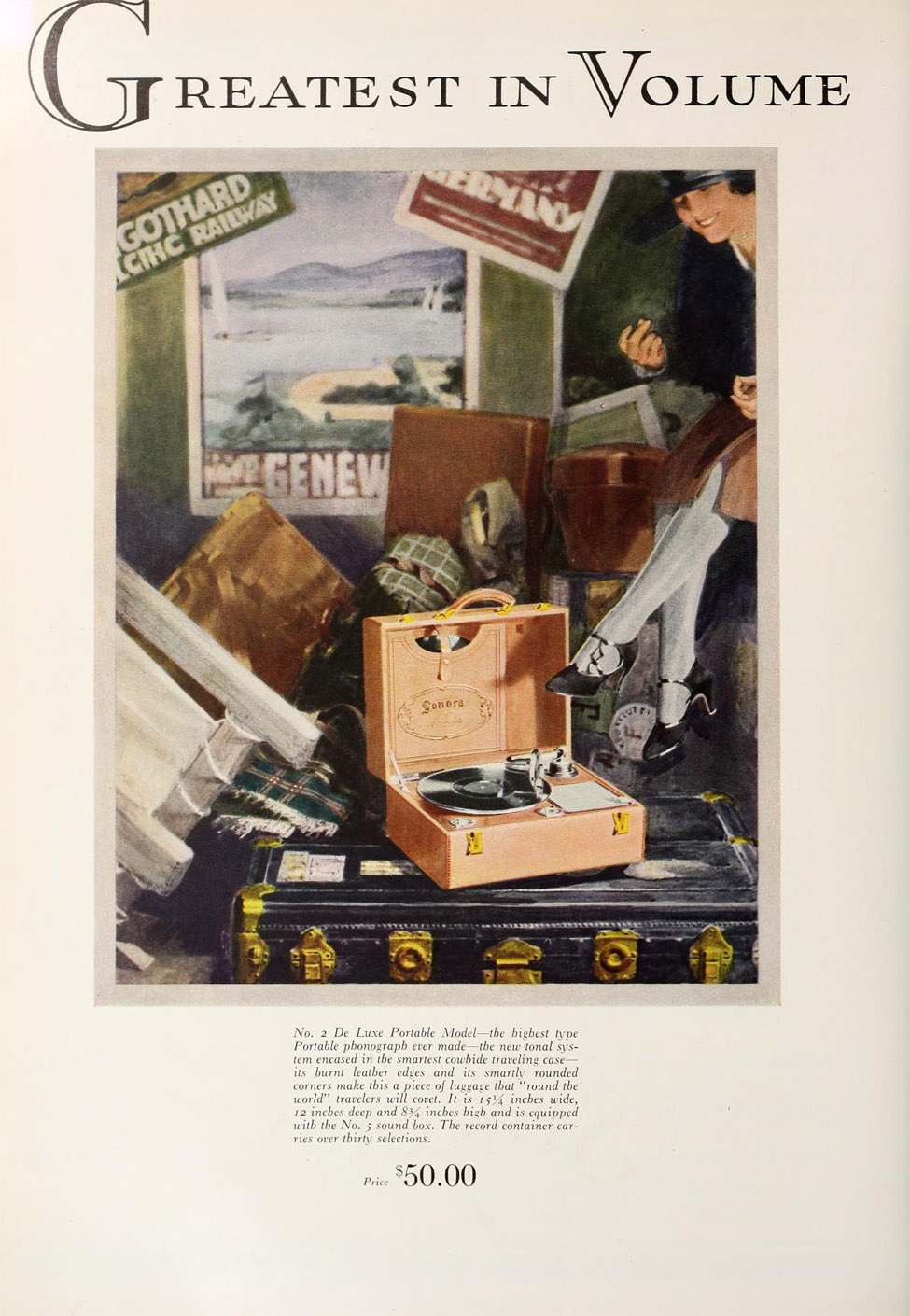 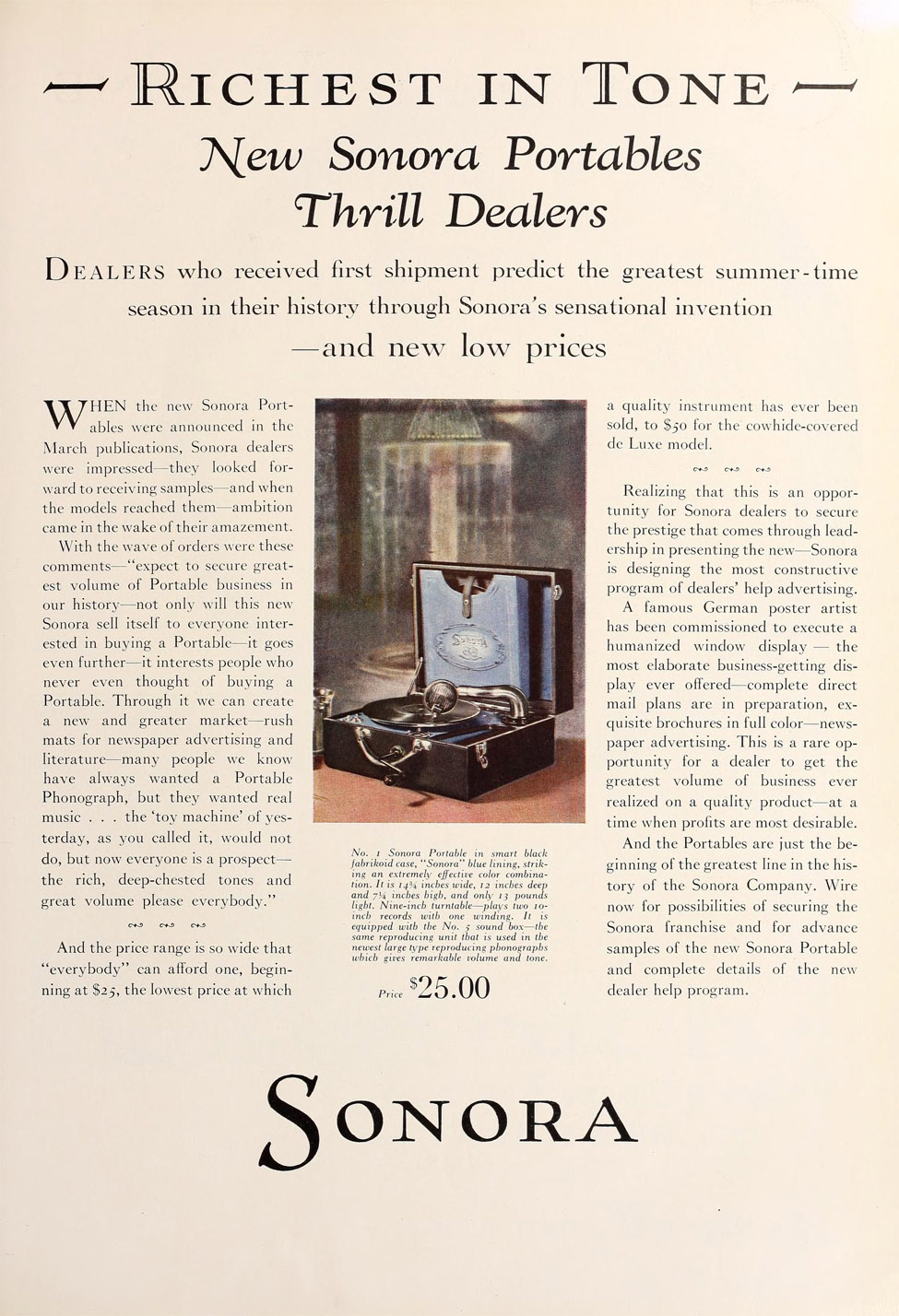 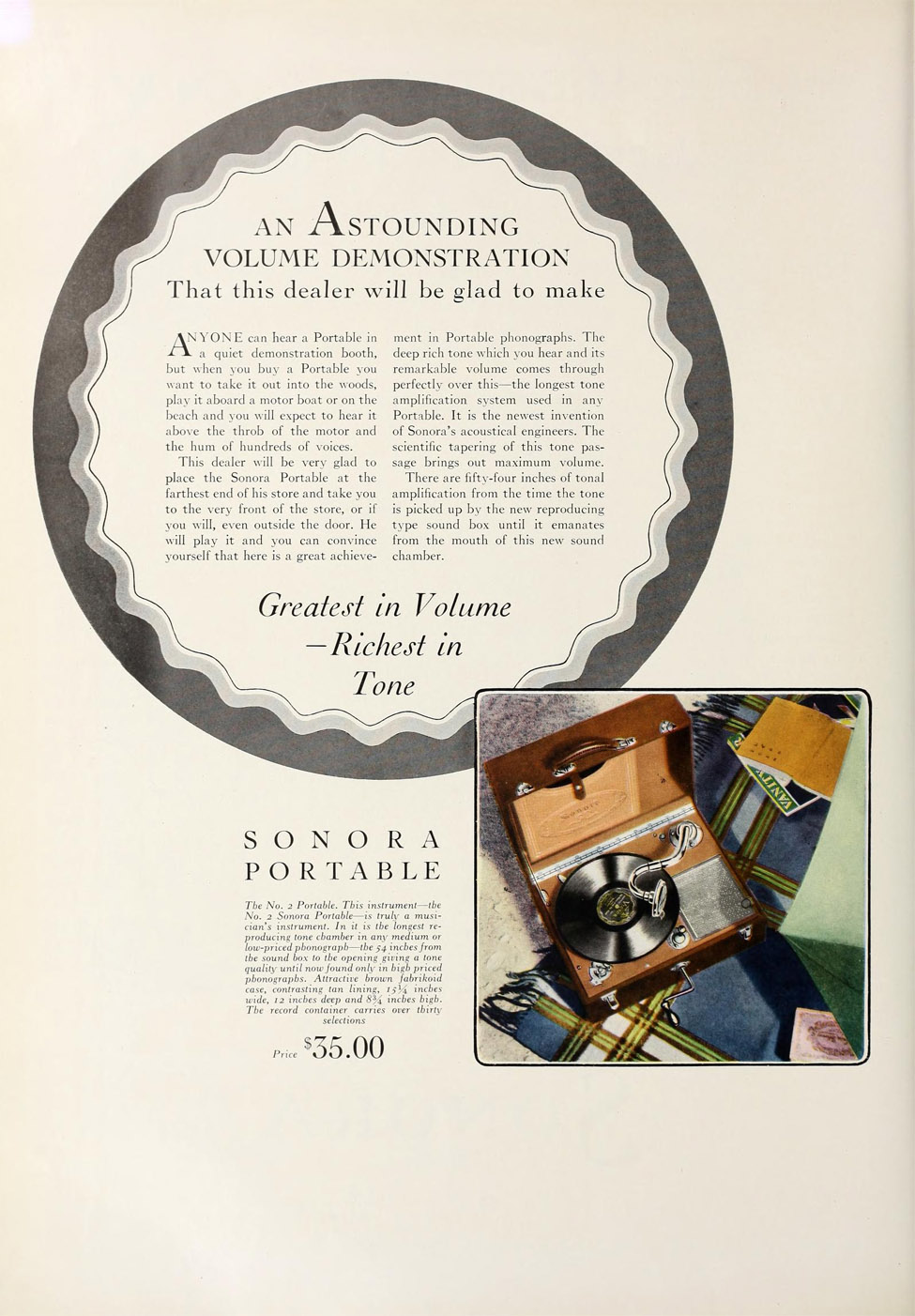 The following information is courtesy of the RadioMuseum

Sonora Chime Company at 5 Cedar St., New York City, patented its system of chiming bells to be put into its clocks beginning 1908. Seth Thomas aquired the patent rights in 1908. The Sonora Chime Company was reincorporated in February of 1913 as the Sonora Phonograph Company by its founder, George Brightson. It was located at 78 Reade St., New York City. Sonora was a large phonograph manufacturer. Around 1924 the model line was extended to radios, which were not produced in its own plants, but bought from Ware, Wireless Specialty, Splitdorf, or American Bosch. The successor of "Sonora Phonograph" is Sonora Radio & Telev., Corp.; 325 North Hoyne Avenue, Chicago.

Quote from the Public Libraries of Saginaw, written by Anna Mae Maday:

"The Sonora Phonograph Company operated in Saginaw between 1919 and 1930, but cabinets for the New York company had been made in Saginaw for a number of years. Sonora used the "bulge-line" cabinet patented in 1911 by Jon Herzog in making their phonographs.

John Herzog was born in Frankenmuth in 1867. As a young man he worked in furniture factories in Saginaw and Grand Rapids before going to Europe for further experience. With financial backing he established the Herzog Art Furniture Company on South Michigan Avenue. In 1923 the Sonora Phonograph Company of New York officially merged with Herzog Art Furniture of Saginaw.

At the Panama-Pacific International Exhibition in San Francisco the Sonora phonograph was awarded a gold medal for its quality. Radios became popular in the 1920's, and the company turned to the manufacture of radio cabinets. In 1929 the New York investors obtained complete control, and then went bankrupt in 1930. Sonora workers believed that if Jon Herzog had been in charge, the company would have survived the depression.

In summer 1927 the company's headquarters moved to Saginaw. Sonora had a branch in Oakland, California, that later became Magnavox.

Sonora was one of the companies that were allowed to exist by the big three (Victor, Edison and Columbia) to avoid threats of a trust suit. Because Sonora had paid a lot of money in royalties on patents held by the big three on a per unit basis, it could only compete with them on their high-end machines..."