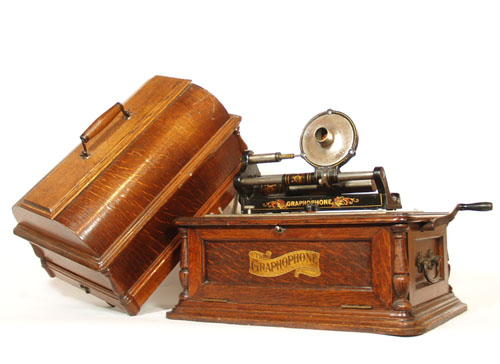 The Phonograph Girls is a vaudeville melodrama presented in 1906 by the "Jersey Lilies," a company which opened in New Orleans in September 1906 and then went "on the Western circuit." The Talking Machine World wrote that

"the sketch originated in London, England, and was reported a success. One of the scenes represents the interior of a talking machine store, and the Columbia Phonograph Co.'s Twentieth Century machine is employed to advantage in revealing the plot."

This scrapbook page of ephemera starts with the 1906 Talking Machine World's article about the musical skit "The Phonograph Girls." Newspaper reviews identify theatres and details about this play as it travelled its "Western circuit" of vaudeville. (1) (2)

Ads for the 1906 Columbia Twentieth Century Graphophone show the machine that was used in The Phonograph Girls "in revealing the plot."

Clippings of 1906 interiors of talking machine stores provide some contemporary context since a store's interior was one of the scenes represented in this musical skit. 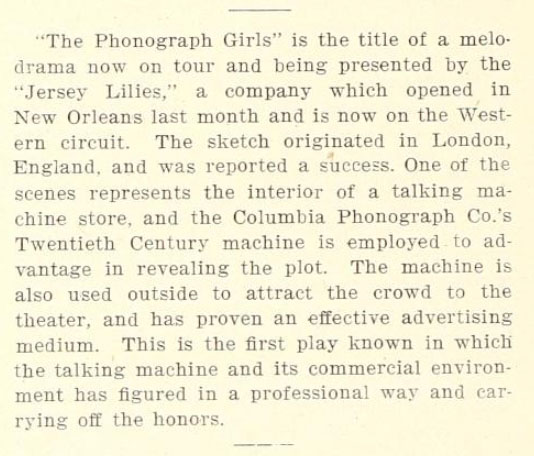 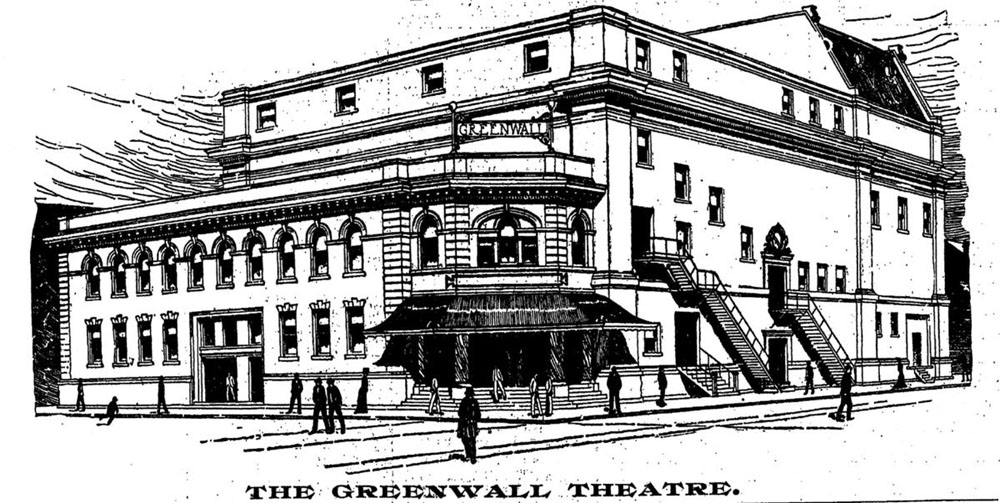 An illustration of New Orleans Greenwall Theatre as it appeared in the Oct. 20, 1904, edition of The Daily Picayune.

Note: Sarah Bernhardt in March 1906 appeared in this theatre for a seven-night stand. (3)

Courtesy of THE TIMES-PICAYUNE ARCHIVES 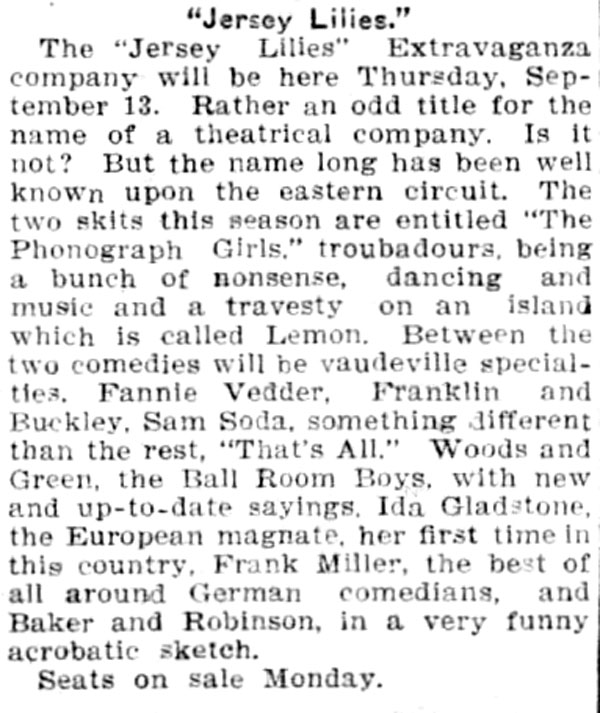 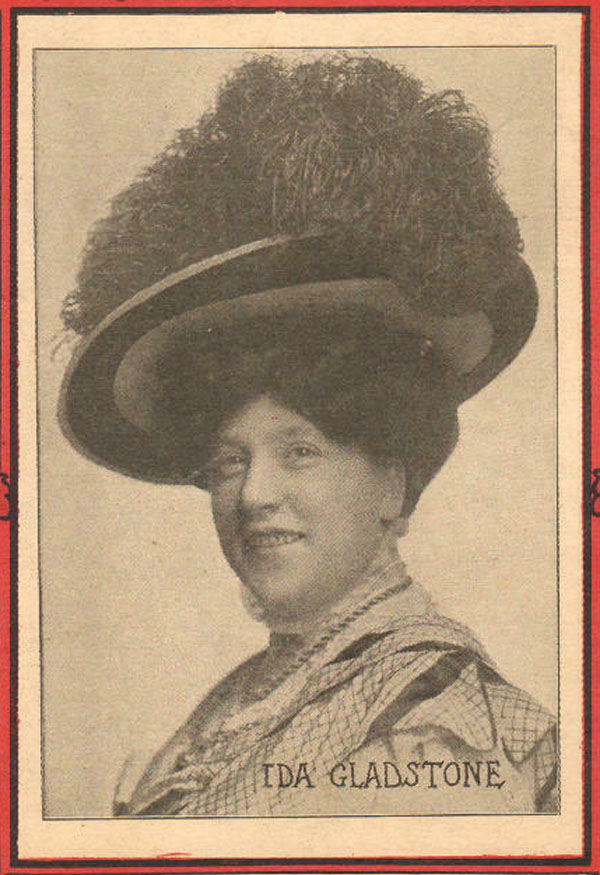 "Ida Gladstone, the European Magnate, her first time in this country..." 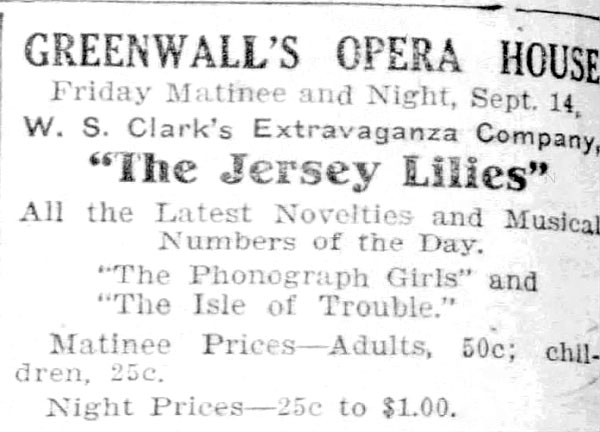 William Clark was still Manager of "The Jersey Lilies" for the 1910-11 season, Julius Cann's Official Theatrical Guide 1910-1911 "Traveling Companies and Their Managers"

"A chorus of fourteen girls dances to music played by a big phonograph on the stage." 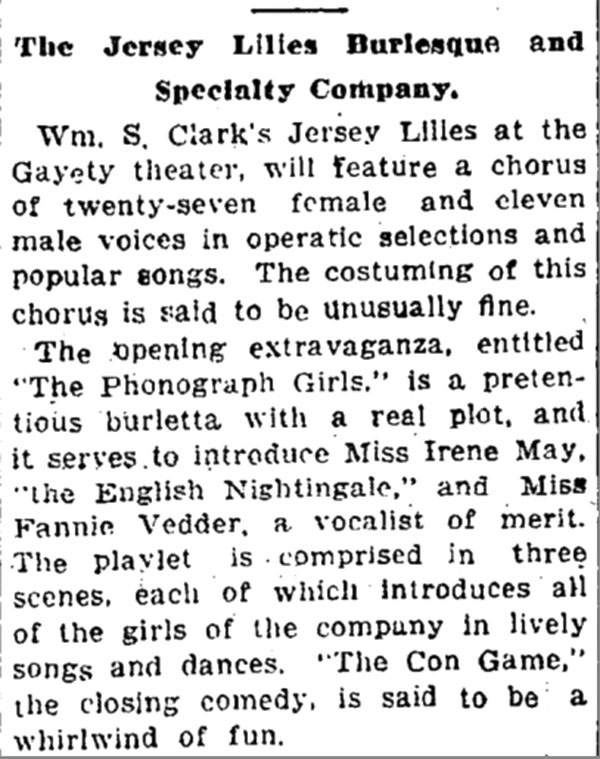 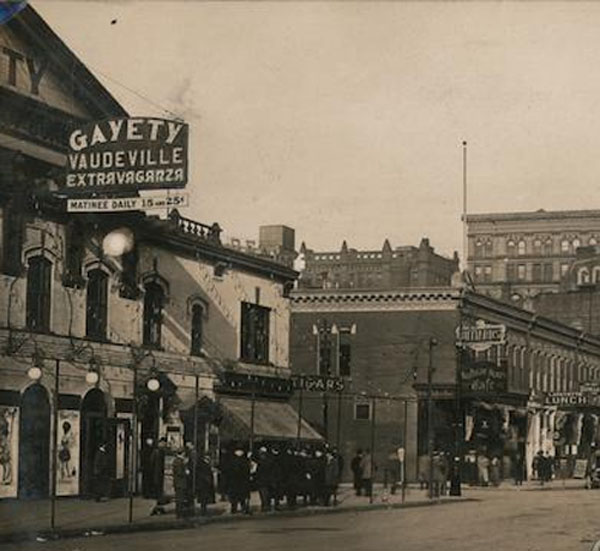 "The opening extravaganza, entitled "The Phonograph Girls," is a pretentious burletta with a real plot, and it serves to introduce Miss Irene May, "the English Nightingale"... 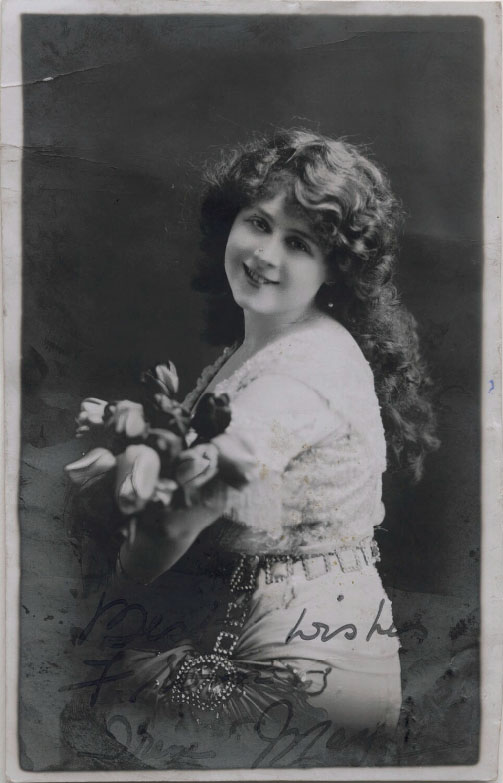 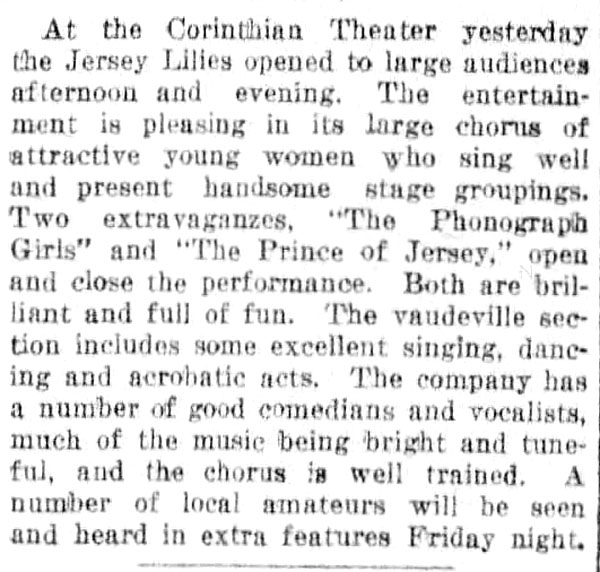 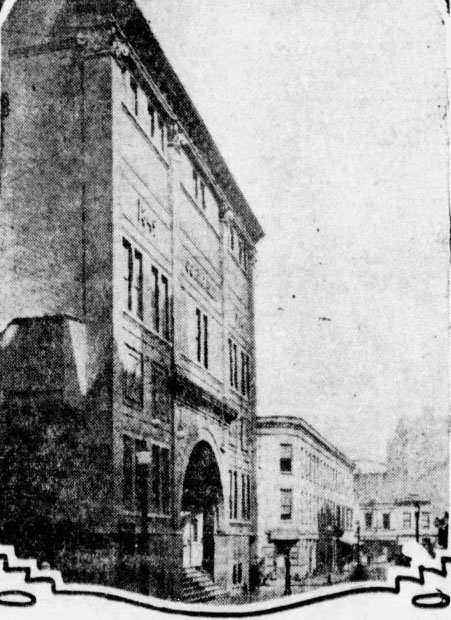 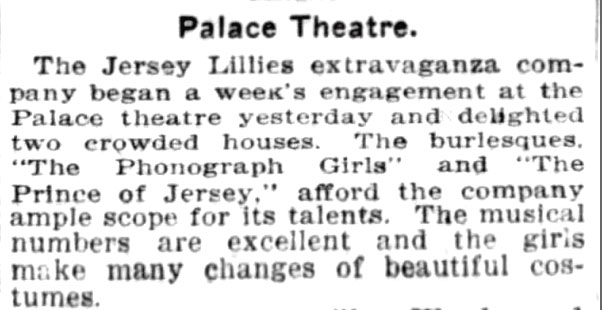 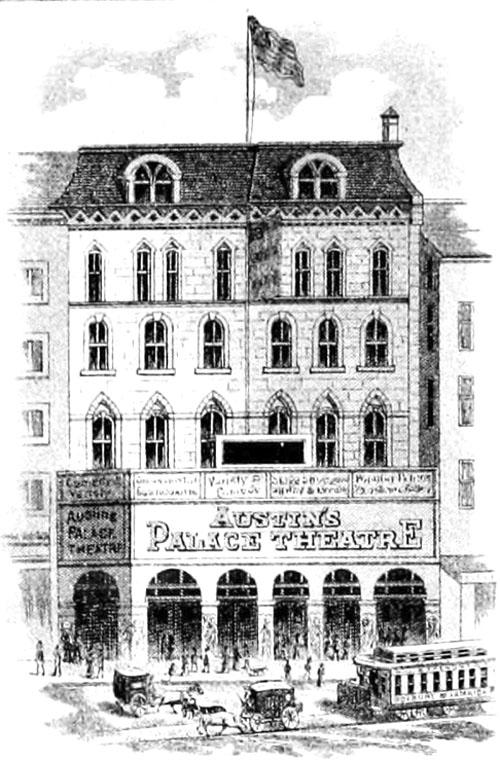 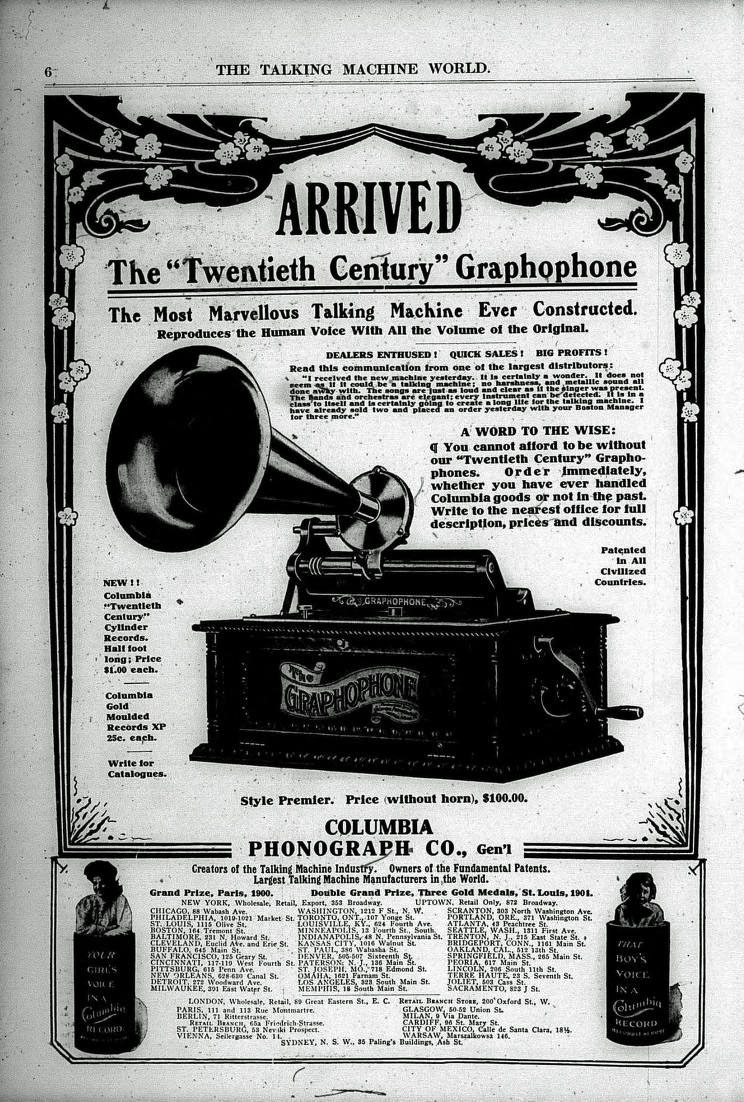 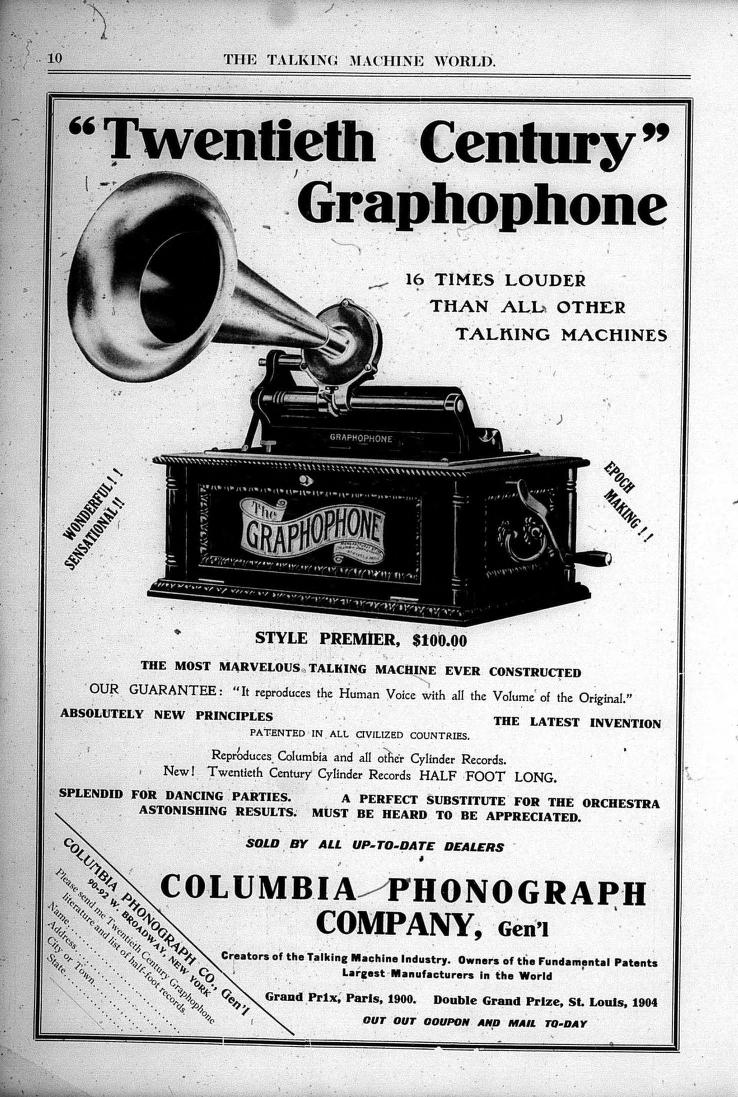 "16 Times Louder Than All Other Talking Machines," The Twentieth Century Graphophone"

The New Columbia Twentieth Century Graphophone was publicized as being so loud it was heard outside phonograph stores causing street obstructions. 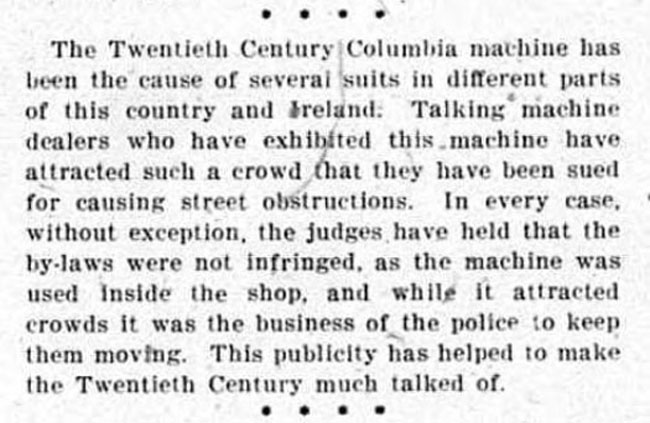 "The Twentieth Century Columbia Graphophone has been the cause of several suits for attracting crowds that caused street obstructions. In every case the suits have been dismissed." The Talking Machine World, November 1905 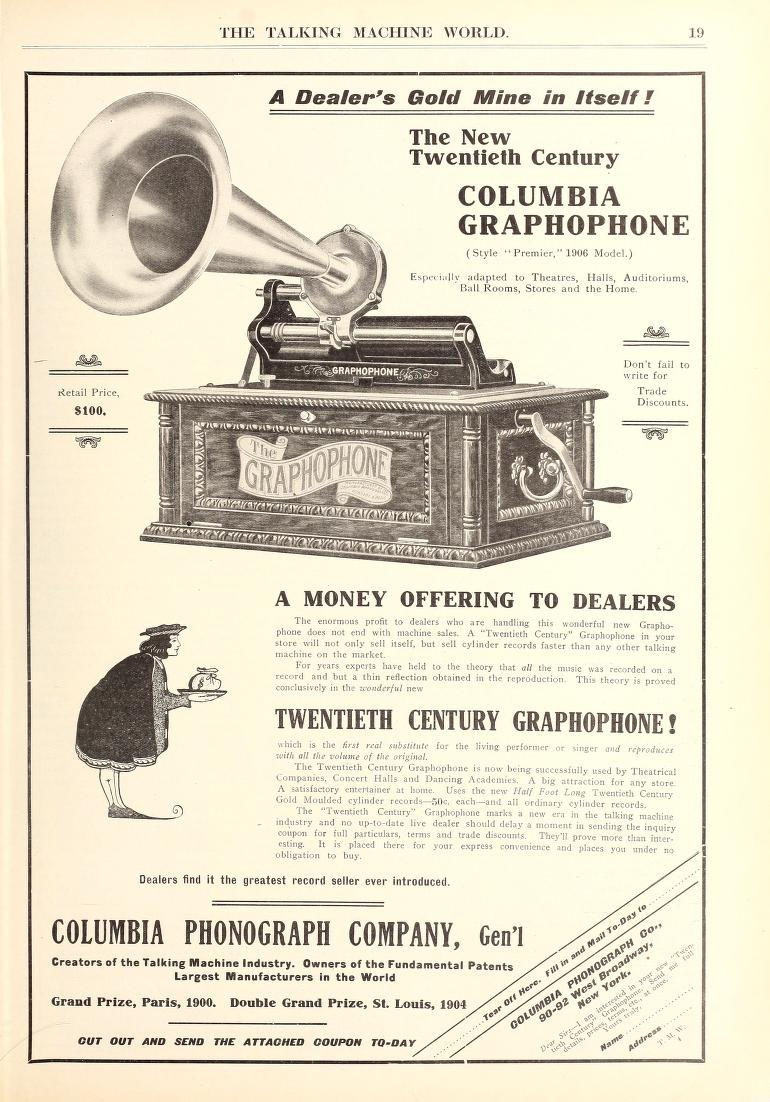 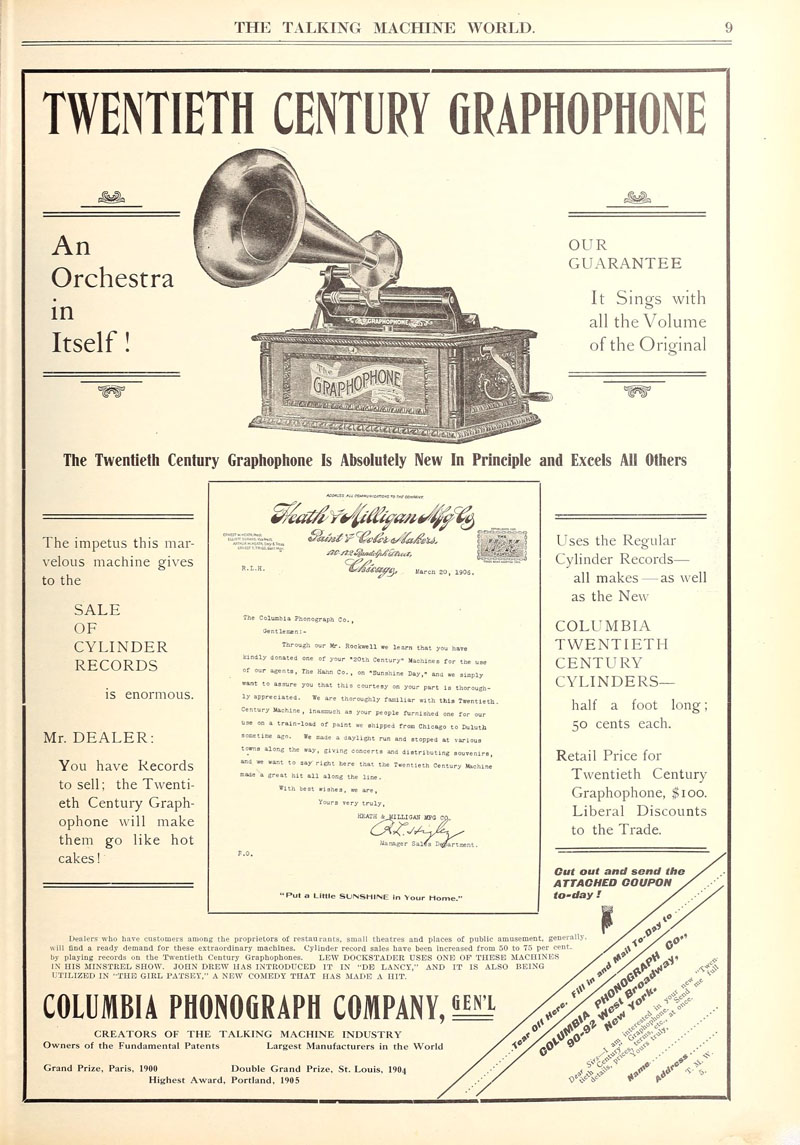 An extraordinary machine for 'restaurants, small theatres and places of public amusement."

"LEW DOCKSTADER USES ONE OF THESE MACHINES IN HIS MINSTREL SHOW. JOHN DREW HAS INTRODUCED IT IN THE "DE LANCY," AND IT IS ALSO BEING UTILIZED IN "THE GIRL PATSEY," A NEW COMEDY THAT HAS MADE A HIT." 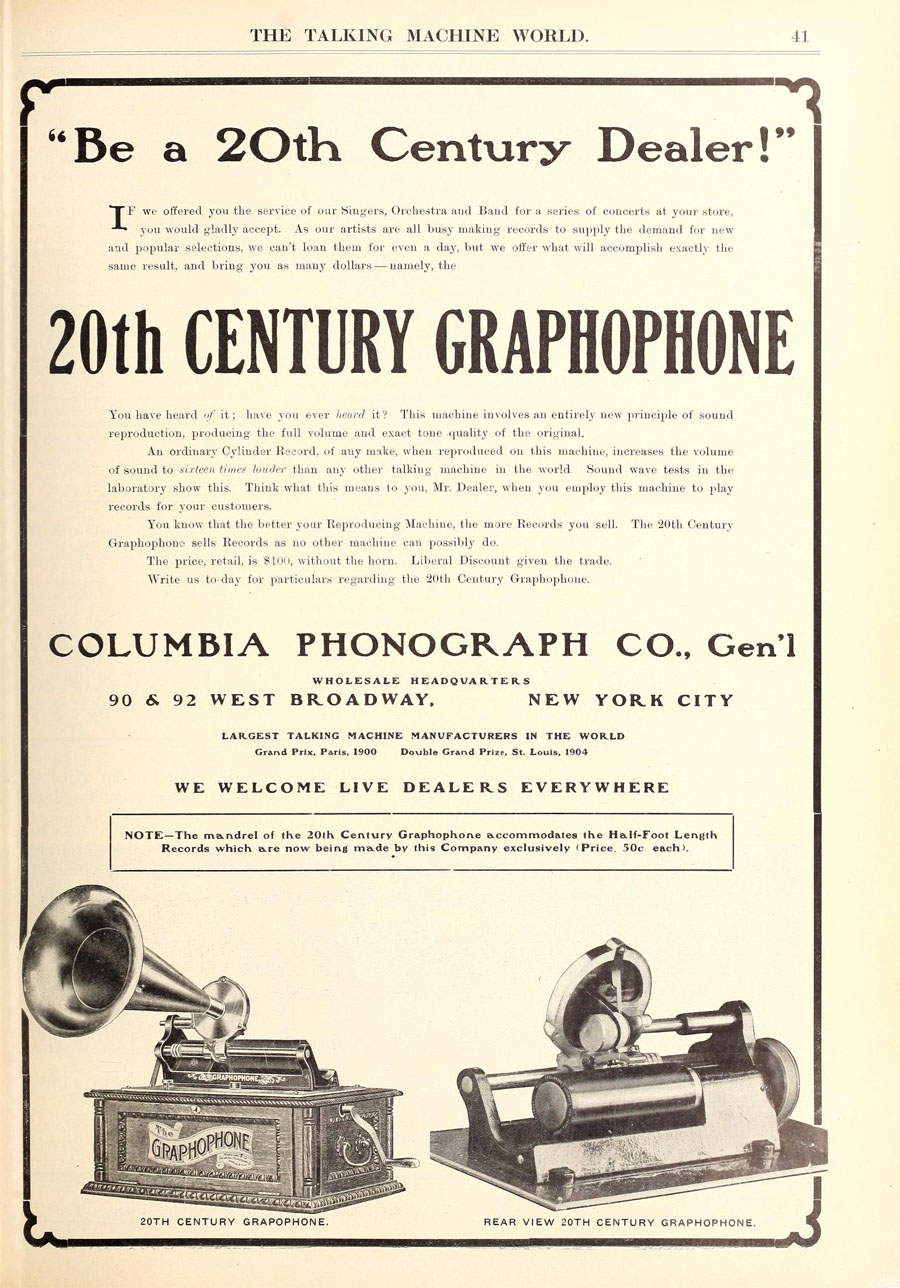 "This machine involves an entirely new irnciple of sound reproduction, producing the full volume and exact tone quality of the original." The Talking Machine World, April 15, 1906

For a close-up and description of the Higham reproducer used by the Twentieth Century Graphophone see the British Library Sounds - Columbia Model BC graphophone: the amber wheel.

FACTOLA: "The Higham Reproducer, invented by Daniel Higham, was used in Higham's talking machine named the High-am-o-phone and was displayed at the St. Louis World's Fair in 1904 as part of the exhibit of Columbia Phonograph Company records and machines. Higham's machine was noted on the exhibit's inventory sheet (#28) as "the loudest sound-reproducing machine in the world." (Courtesy Antique Phonograph Monthly 11:1, Allen Koenigsberg and Doug DeFeis). 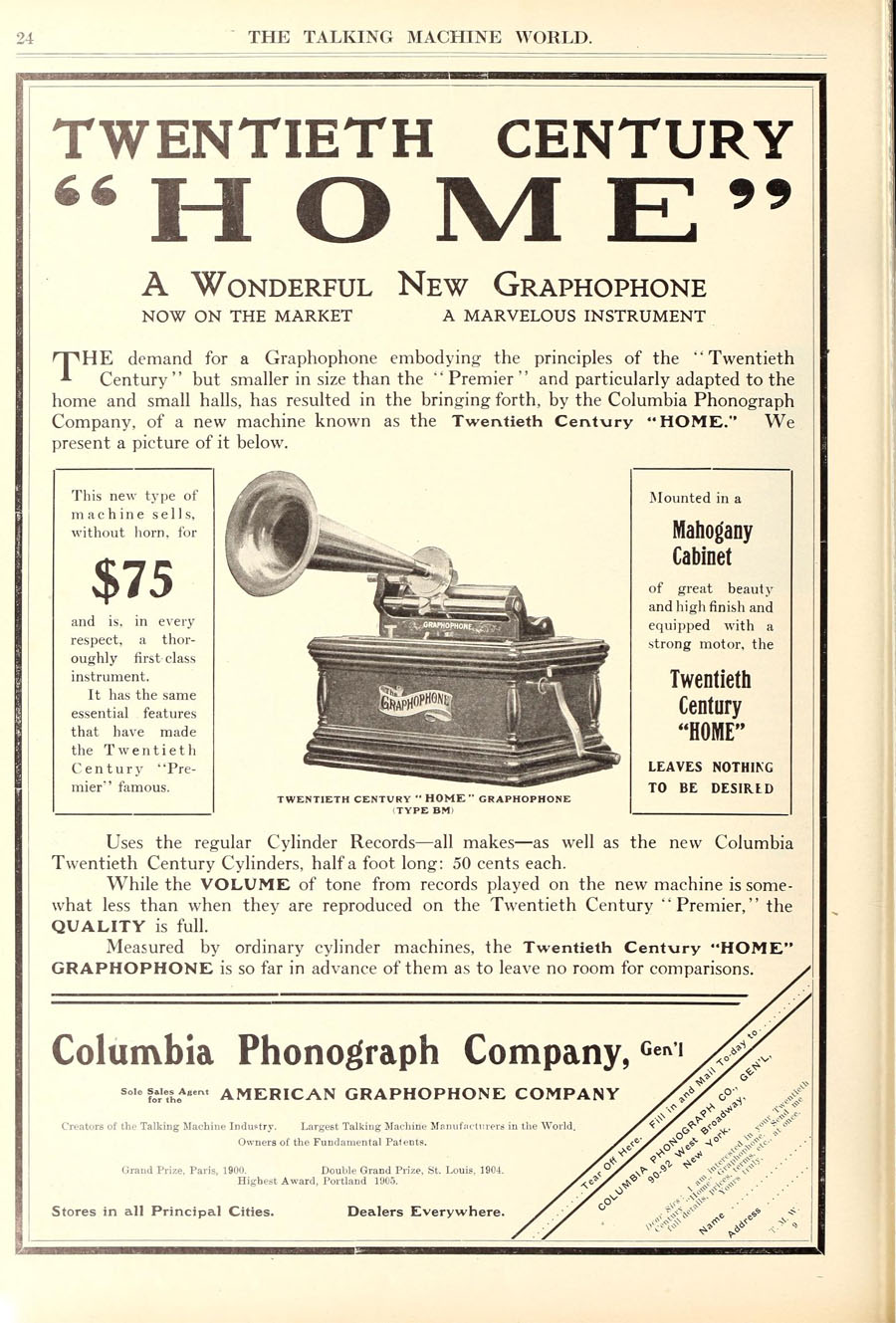 The Columbia Twentieth Century Graphophone "is also used outside to attract the crowd to the theater, and has proven an effective advertising medium." The Talking Machine World, October 15, 1906 p. 40 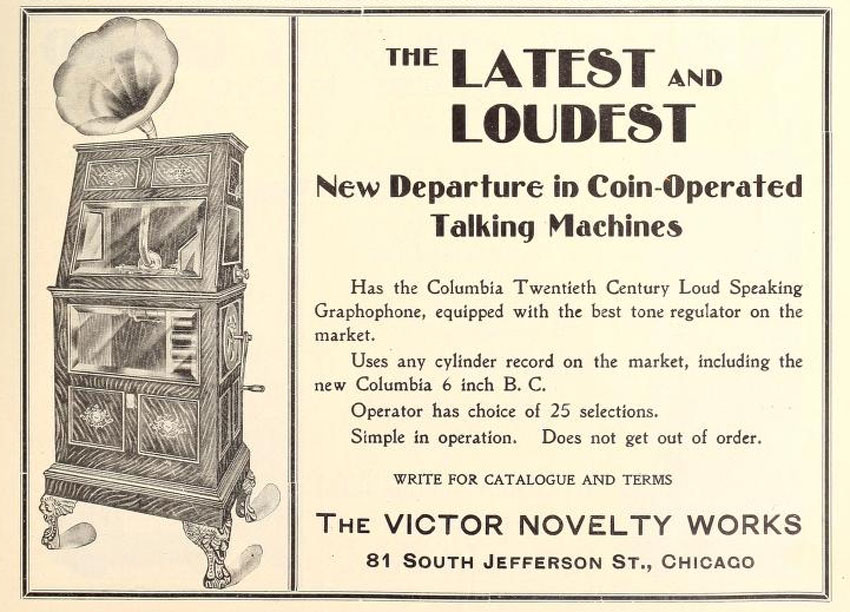 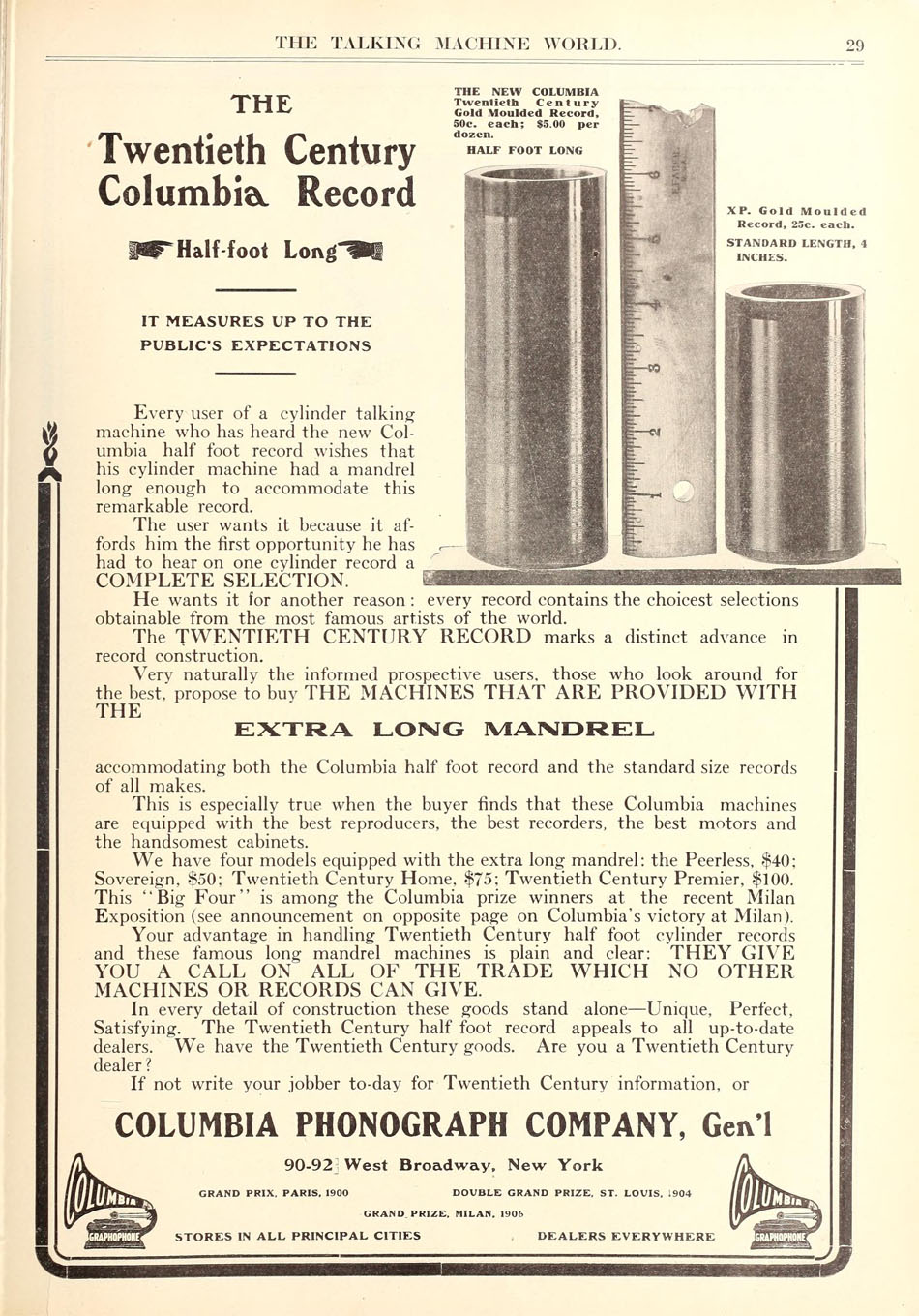 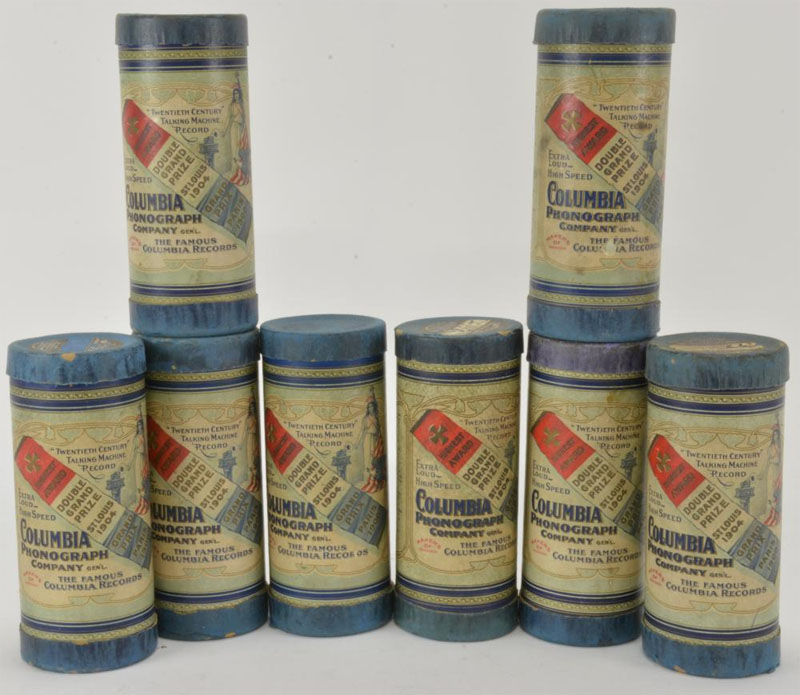 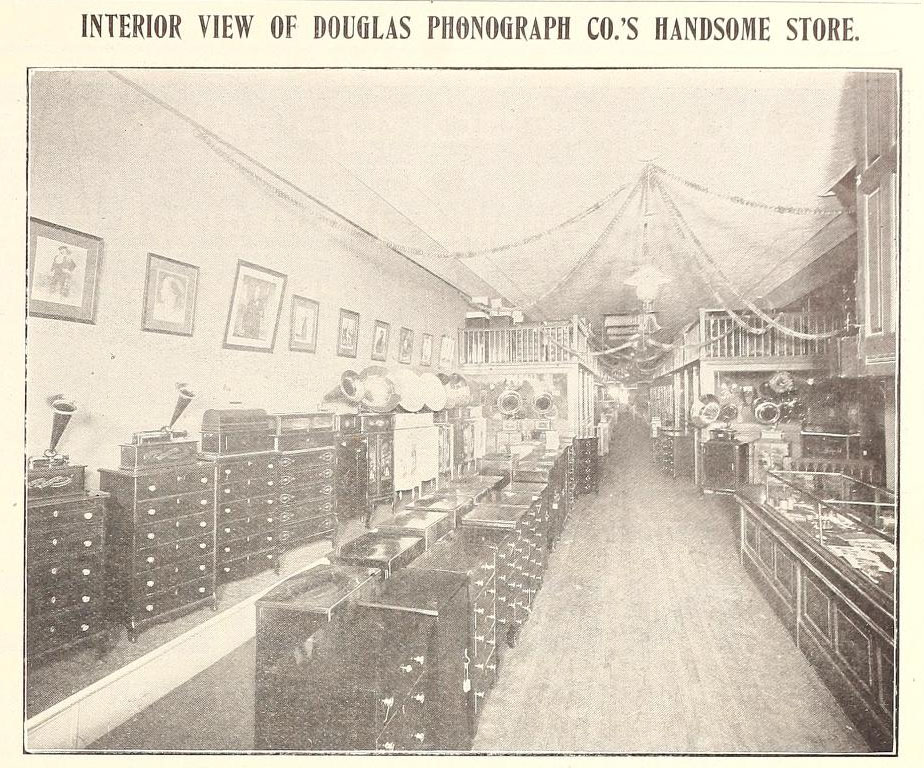 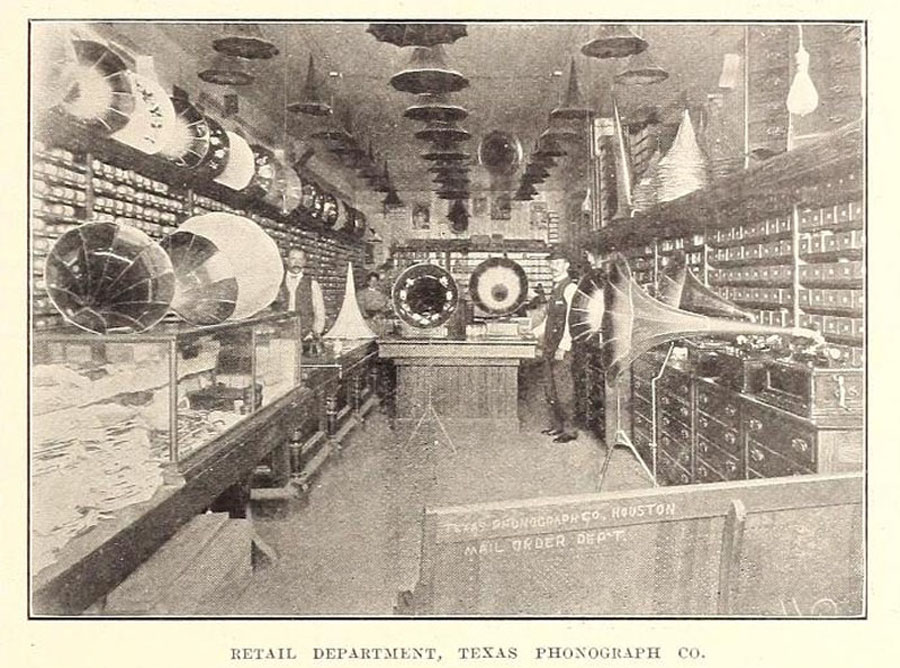 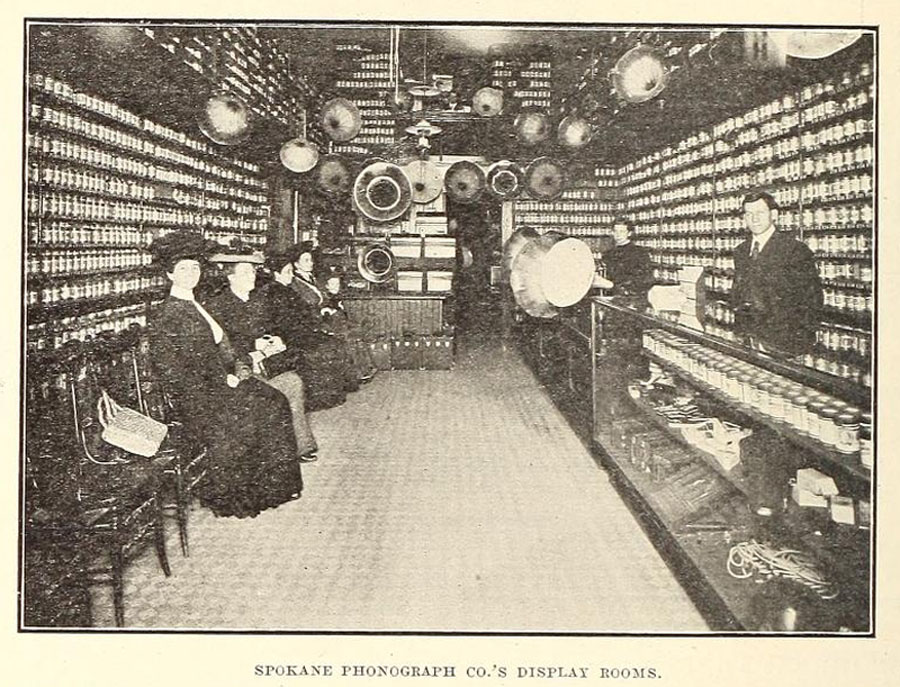 FACTOLA: "THE PHONOGRAPH GIRLS is the first play known in which the talking machine and its commercial environment has figured in a professional way and carrying off the honors." (The "talking machine" used was Columbia's Twentieth Century Graphophone. The commercial environment was a scene inside the interior of a phonograph store). The Talking Machine World, October 15, 1906 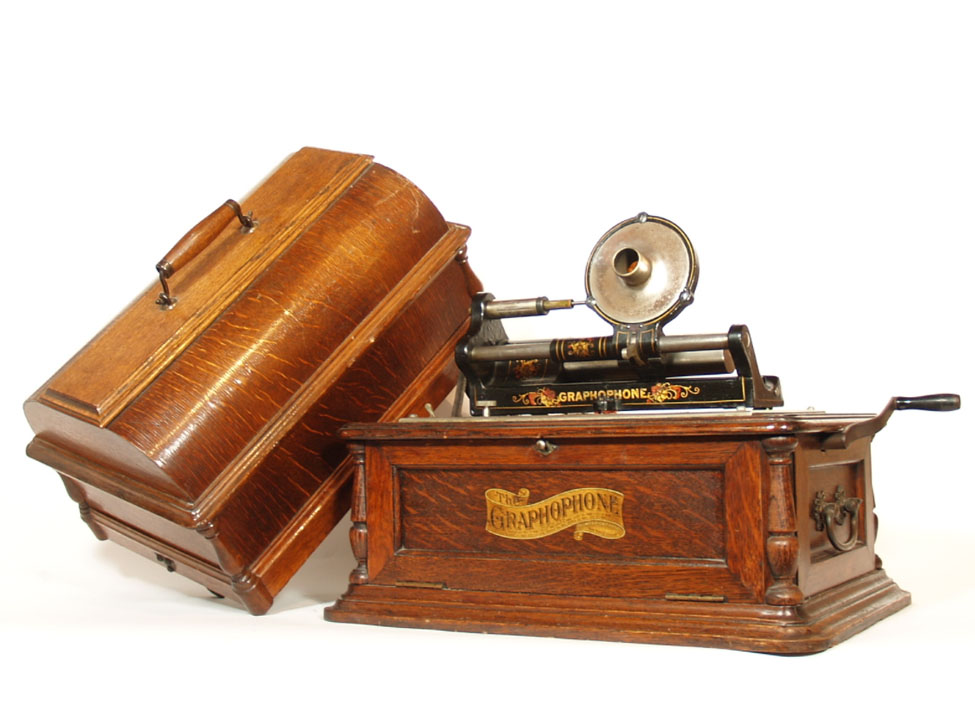 The Columbia Twentieth Century (BC) with Higham Reproducer (Courtesy TechnoGallerie)

Unfortunately, no script or musical score or cylinder record has been located for The Phonograph Girls.

More about that sketch can still be found, but there are also other examples of performing arts productions having connections with the BC Graphophone and other talking machines.

FACTOLA: The "BC" Columbia Graphophone was used by the Cameraphone Company in 1908 to combine recorded sound with moving pictures. A performer "speaks, and the words come from the Graphophone in perfect accordance with the movements of his lips....He sings his song with every appropriate gesture, the word words and music all the while coming from the Graphophone." One of the most successful of the combined songs and moving pictures is the famous "Smile, Smile, Smile" from Lew Field's latest production..." (Source: May 1908 The Columbia Record trade journal and courtesy of The Antique Phonograph Monthly). 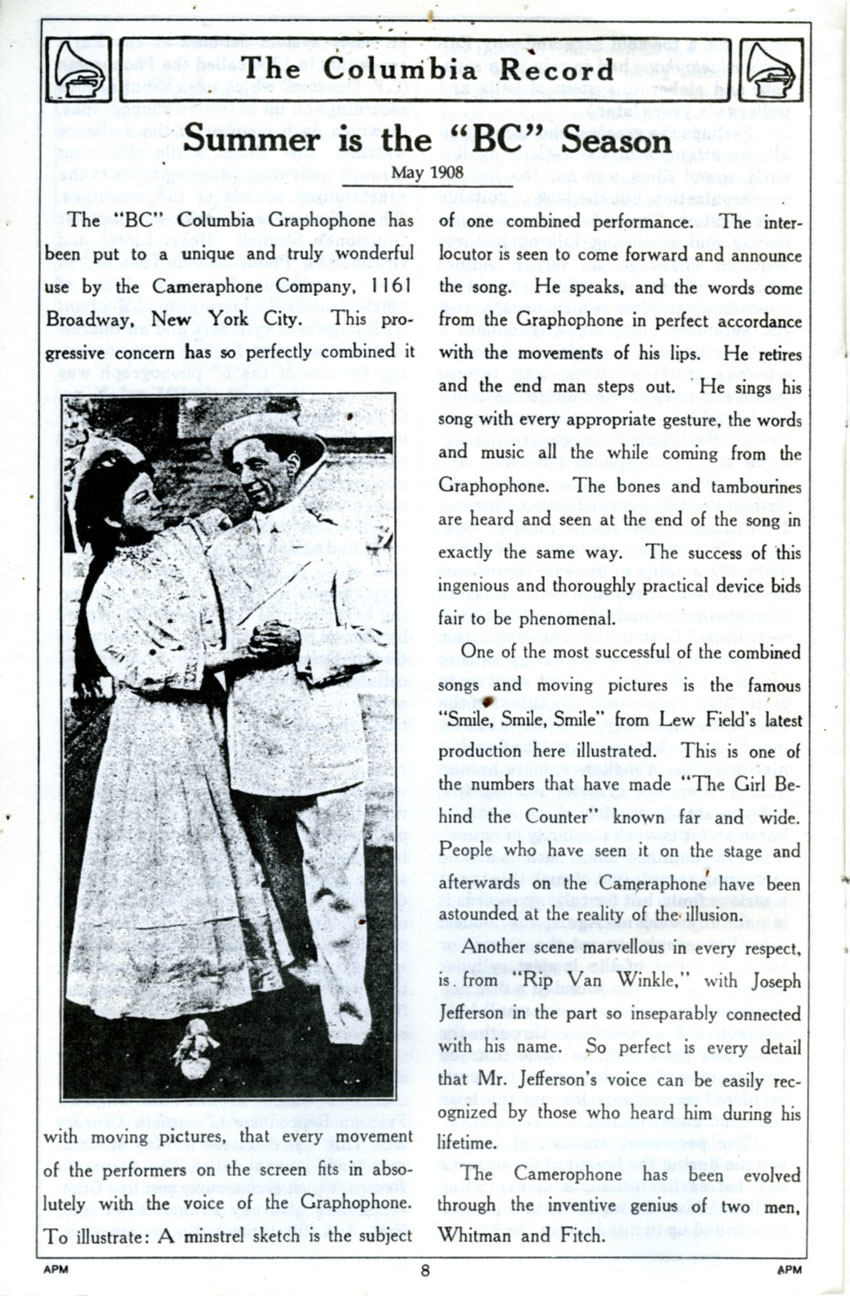 The Columbia Record trade journal, May 1908 (Courtesy of The Antique Phonograph Monthly)

"The Cameraphone Co., apparently chose from the very beginning to use machines based around the Higham Friction Reproducer (Twentieth Century BC)." (Lights! Cameraphone! Action! by Doug DeFeis, Issue 89 Vol XI - No1., 1993, The Antique Phonograph Monthly).

A competitor to the Cameraphone was the Chronophone "patented by Léon Gaumont in 1902 to synchronise the Cinématographe (Chrono-Bioscope) with a disc Phonograph (Cyclophone) using a "Conductor" or "Switchboard". This sound-on-disc display was used as an experiment from 1902 to 1910....The Chronophone would show Phonoscènes (an early forerunner of music videos) and films parlants ("Talking Films") almost every week from 1911 until 1917 at the Gaumont Palace, "the Greatest Cinema Theatre in the World", previously known as the Paris Hippodrome." Wikipedia

FACTOLA: "The Judge," an English play in 1890 used a phonograph "to provide the sound effects of a crying infant from off stage." This is believed to be the first use of a phonograph in a supporting role of a stage play. (Source: "Edison in Hollywood" by Allen Koenigsberg, The Antique Phonograph, June 2016).

The Phonograph in the Movies

There are countless scenes in movies that include a phonograph.

Sometimes a phonograph is just for set design, providing an association with a particular time period. Playing a record can also set the mood or again reinforce the time period of a scene.

But in the most interesting movies (at least in the opinion of Friends of the Phonograph) it can be the star of the show. One example of an Edison phonograph and record playing that role is the 2015 Disney movie Tomorrowland. To learn more visit The Phonograph in the Movies - The Eiffel Tower, an Edison Record and Tomorrowland.